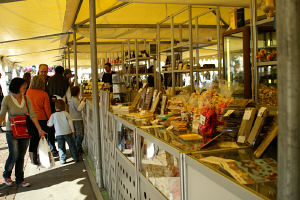 So, it’s pretty well established that I like Italy. In addition to Italy, I’m also a fan of chocolate (like, what, 99% of the world population or something?), so when you put the words “chocolate” and “Italy” in the same sentence I’m going to perk up a bit. That’s why I went to Turin for the last day of that city’s annual chocolate festival – CioccolaTÒ.

The name of the festival, CioccolaTÒ, is a play on the Italian word for chocolate and the Italian name for the town of Turin. In Italian, chocolate is “cioccolato,” and Turin is “Torino” – so by writing it CioccolaTÒ, with an accent on the end of the word, they’re cleverly emphasizing the Torino aspect of this chocolate festival.

In Italy, the biggest chocolate festival is quite a bit further south, in Perugia, Umbria. But Turin has its own history with chocolate, so it’s not just riding Perugia’s coattails here. Turin, as well as the greater Piedmont area, is the home of the Ferrero company. And if that name doesn’t mean anything to you, certainly the company’s product’s name will – Nutella. That addictive combination of chocolate and hazelnut is, in fact, called gianduja (or gianduia), and the gianduja flavor comes from the Piedmont region. So it’s not surprising that Turin’s chocolate festival leans heavily on this famous hazelnut-chocolate combination. But that’s not all you’ll find at CioccolaTÒ.

>> Need a place to stay amidst all the chocolate consumption? Look for and book Turin hotels and Turin hostels.

Some photos from the day, from the top down: stacks of chocolate bars (yes, that’s a chocolate bar costing €7); the “cioccolata calda,” or hot chocolate vendor (this stuff is more like warm pudding than any hot cocoa you’ve ever had, and is highly recommended – even in warm weather!); chocolate “sausage & eggs;” and chocolate pasta 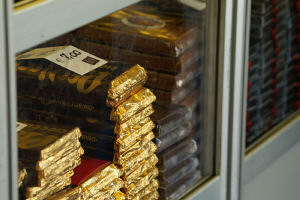 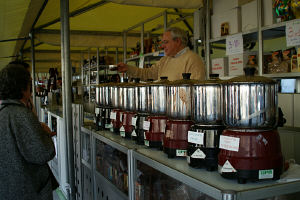 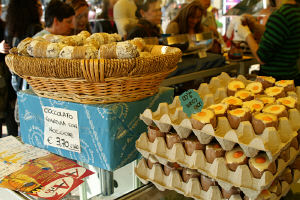 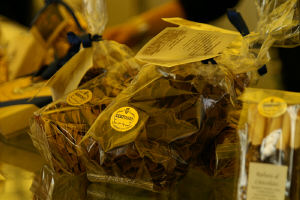 In 2008, the festival had a theme for every day – the themes ranged from things like Spices Day, Dark Day, Milk Day and Creamy Day. The day I went was Wine & Beer Day, which translated into many of the chocolate vendors having chocolate liqueurs, although there was a beer tent and a Scotch tent – presumably each was extolling the virtues of combining certain of their beverages with chocolate, but I didn’t ask. In addition to the themes, there are also scheduled presentations and demonstrations given on a stage at the festival, and even a children’s area. But the highlight for me, and I imagine many others as well, was the opportunity to browse the various chocolate vendors counters.

L-R: Chocolate legos (and what do you think the gal behind the counter is eating?), and a giant chocolate Easter egg the size of that woman’s torso 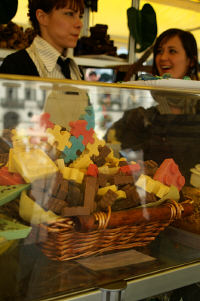 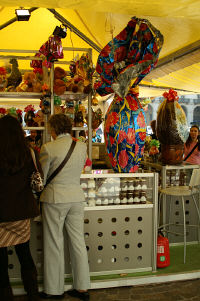 There were several tented areas under which dozens of chocolate companies had set up shop. Most had really eye-catching displays, including lots of Easter-themed chocolate art, and some were offering free samples. After making a slow tour of all the offerings, I finally went back to the start and ended up buying a few things (I ate most of them immediately). I suppose if I were really into cooking, and were living here for more than a few weeks, I’d probably have sampled more widely and brought more goodies home – but still, CioccolaTÒ was a fun excuse for a day-trip to Turin. 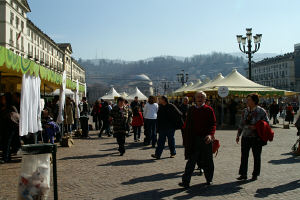 CioccolaTÒ 2008 was the 6th edition of this festival, and if you’re in the area when it’s running – and you’re a fan of chocolate – it’s certainly a nice way to spend an afternoon.

And if these pictures weren’t enough, be sure to check out my favorite picture from the chocolate festival here, plus all the other Turin pictures I took that day in the Italy Photos section.

More Information: The official website for CioccolaTÒ is only in Italian, but it’ll at least give you an indication of when this year’s event is. That means all you’ll need to do is arrive in Turin during the festival and get directions. Or just follow the scent of cocoa.