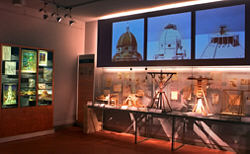 I got an email recently from a WhyGo Italy reader who will be spending some time in Florence next year and says the Leonardo da Vinci museum in his hometown of Vinci is an absolute must-see on her itinerary – but she couldn’t figure out how to take the train to get there from Florence. I eventually found the answer, but it was buried enough that I thought I’d write a post about it here and share it with anyone else who’s interested in making the trip to Vinci.

The Museo Leonardiano di Vinci is located inside the Castello dei Conti Guidi in Vinci, and is an incredible collection of da Vinci’s drawings and models made from those drawings – including some large things like his bicycle, parachute and even the articulated wings da Vinci designed. There are three levels to the museum. The ground floor has long glass cases along the walls with smaller models and drawings in them. The first floor is where you’ll begin to see some of the larger-scale items in the collection, and the second floor contains drawings and models da Vinci made for a book by Luca Pacioli (a Franciscan friar and mathematician who collaborated with da Vinci).

Founded in 1953, the Museo di Vinci is certainly the main attraction in the Castello dei Conti Guidi. The castle itself dates back to the 1100s, although it has been added to and changed significantly over the centuries. The museum was opened during the celebrations for the 500th anniversary of da Vinci’s birth in 1452.

Unfortunately, reaching Vinci and checking out this cool museum isn’t as easy as hopping on a train in Florence and getting off in downtown Vinci. It’s not hard to get to Vinci, however, so long as you’re up for a little adventure on Italian transportation. You’ve got to take the train to nearby Empoli, and then take a bus from there to Vinci. In Florence, you’ll need to find the Firenze/Pisa/Livorno train line and take it until the Empoli train station. Then take the Copit bus line to Vinci.

Also unfortunately, the website that comes up first in searches for the Museo di Vinci is not the official one and doesn’t have visitor information. It does have a little description of the different floors of the museum (in English!), but it won’t tell you how to get there. And the email I sent to the contact address on that site bounced back. I did eventually find the official museum website, which is full of great information but is all in Italian. I’ll include a link to the museum’s official website below, but I’ve also tried to put the most important visitor information here in English, too.

>> There’s a lovely video from CNN International about Leonardo da Vinci here that includes a glimpse of the town of Vinci (including where Leonardo was born) as well as the inside of the museum in Vinci.

Admission: €6 (some discounts available, including for groups of 15 or more, children age 18 and under, adults over 65, handicapped people and their helpers, and adults with children in tow)

How to Get to Vinci: from Florence – take Firenze/Pisa/Livorno train line to Empoli station, then take Copit bus line from Empoli to Vinci (bus line website, only in Italian, is here)