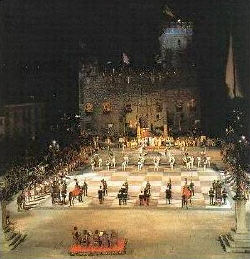 Even if you don’t speak Italian, many games transcend language altogether so you don’t need to speak to understand them. Chess is one of those games, and it’s even more universally understood when you combine it with the notion of two men vying for the hand of a lovely young woman! What we’re talking about here is a tradition dating back to the mid-15th century, when a chess match instead of a duel was used to decide who of the two eligible suitors would marry the woman in question. But commemorating that occasion with a regular chess match wouldn’t be very interesting, would it? Not interesting enough for the town of Marostica, Italy, which makes recreating a chess match a spectator sport.

Every even-numbered year in Marostica, which is in the Veneto region of Italy roughly an hour northwest of Venice (but not on a train line), to mark the occasion of that 1450s chess match they hold a life-size chess match in the town’s main square. It’s called “La Partita a Scacchi con Personaggi Viventi,” and you may be able to gather from that title what makes this chess match so special – instead of chess pieces, it’s played with human beings and horses (in period dress, of course) on a gigantic board.

In addition to the chess match, which takes place the second weekend in September of even-numbered years, there are also period dances and music throughout the weekend and fireworks displays at night. The people playing the two suitors are the ones who decide the moves the chess “pieces” take, and there are also people playing the roles of the court – including the woman who the two men are both hoping to marry. The instructions which are given to the players before the chess match commences are still given not in Italian, but in the local dialect.

You can easily buy tickets in advance online – there are different areas of grandstands with different prices ranging from (at the time of writing) €10-80, depending on where you’d like to sit and which show you’d like to see. There are four performances of the chess match throughout the weekend (one each Friday and Saturday, and two on Sunday), so you should be able to find one match which works with your schedule. It’s recommended to buy tickets in advance, as this is a very popular local event and tickets can be hard to come by later on. This also goes for booking your Italy hostel or hotel – it’s a good idea to book in advance if you plan to spend the night and aren’t just on a day trip from Venice.

The city of Marostica may only put on this colorful event every two years, but it’s definitely something to see – especially if you’re interested in getting a peek at the non-touristy Italy, because this town is definitely off the usual tourist path.

What: Living chess match in period costume
When: 2nd weekend in September during even-numbered years
Where: Marostica, Italy; in Vicenza province, Veneto region
How to Get There: No train station means you’ll need to catch a bus or rent a car (here are directions)
Admission: ticket prices vary, roughly from €10-80 (see website for details)
More Information: La Partita a Scacchi con Personaggi Viventi official website, & more info/photos on the festival from Italian Notebook

Find out about more weird and wonderful sights in Venice and nearby, too!