Naples Cruise Terminal: Where It Is & How to Get There

While Naples remains a bit overlooked when it comes to cities people tend to visit in Italy, it is home to one of the country’s major cruise ports – so even if you’d be nervous about going to Naples on your own, if you book a Mediterranean cruise you’re likely to end up there at some point. And this? This is a very good thing. Because Naples is awesome. 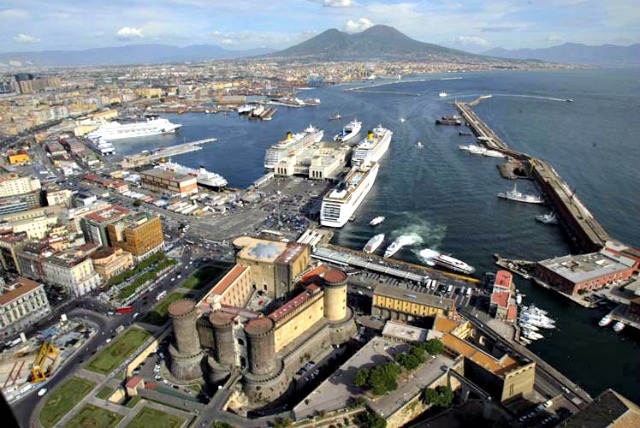 Naples, like Venice, is right on the water – so the cruise terminal is within easy reach of the fascinating historic city center. You can get there and back easily within the timeframe required by your cruise ship, and you can even do a DIY trip to Pompeii or Herculaneum if you plan it right. But first, you’ve got to get your bearings.
This article will show you where the Naples cruise terminal is in relation to the rest of the city, help you figure out how to get there, and also how to get into the city (or any other day trips you want to do) from your cruise ship.

More useful links for visiting Naples on a cruise:

Location of the Naples Cruise Port/Terminal of Naples

As mentioned, the Naples cruise port is near the historic city center. In fact, since Naples is right on the water, much of the waterfront is taken up by docks for various ships – everything from cargo to small ferries and hydrofoils to cruise ships. The bulk of the passenger ships, however, are in the same general area.
This map shows the location of where most of the cruise ships dock, as well as the city’s main train station, and the excellent archaeology museum. The airport and Sorrento/Amalfi Coast aren’t on this map, but there are also arrows indicating which direction they’re in. The historic center of Naples isn’t marked with an arrow, but you’ll see it labeled on the map between the cruise port and the archaeology museum with the words “Centro Storico.” 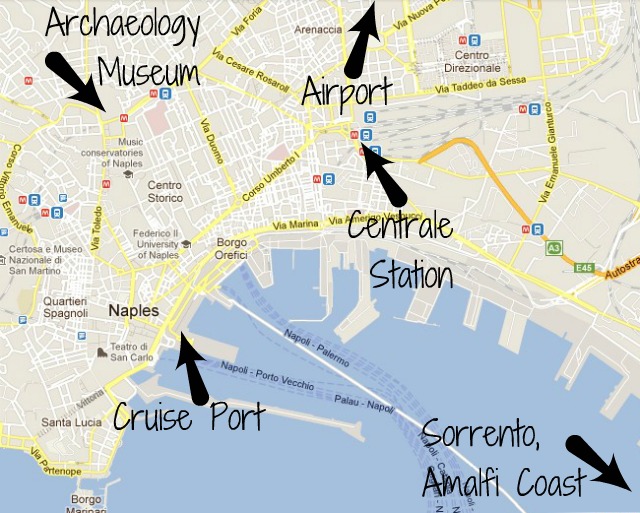 Passenger traffic is concentrated at an area of the waterfront called Molo Angioino (where the arrow is pointing in the map above), with some of the smaller boats also at Molo Beverello. In particular, boats to Sorrento, the Amalfi Coast, and the islands in the Bay of Naples generally depart from Molo Beverello.

Naples’ airport, commonly called Capodichino, is very close to the city center. The Metro system in Naples isn’t terribly robust, and although there’s talk of running a Metro line out to the airport at some point, there’s no guarantee of when (or if) that’ll ever materialize. In the meantime, your options for getting to the Naples cruise port from the airport are public buses or taxis.