The 5 Best Theme Parks in Italy

I always love hearing about an aspect of traveling in Italy that I’m not aware of – so when I got an email from Nick Sim in which he offered to write about the best theme parks in the country, I thought, “Wait, there’s more than one?” So, yes. As it turns out, there’s more than one – and Nick was definitely the man for the job. Take it away, Nick!
There are a huge variety of natural and historic sites to visit in Italy, which can make trips to modern attractions such as amusement parks seem less appealing. However, whether you’re looking for a fun family outing or a day of intense, white-knuckle thrills, the country’s increasingly impressive line-up of theme parks is well worth a look.
While roller coasters, dark rides and log flumes haven’t taken off in Italy to quite the same extent as they have in other European countries (the UK and Germany, in particular), it is still home to some of the continent’s largest and most popular theme parks. As with many other tourist attractions, though, size isn’t everything. Here’s a guide to the 5 best theme parks Italy has to offer – big and small. 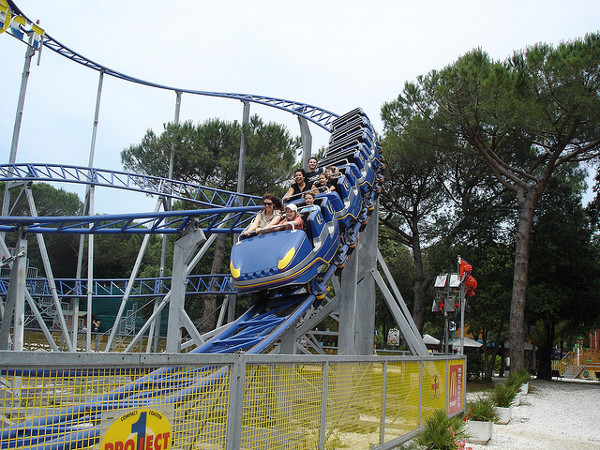 Hidden away in a pine forest in Tuscany is Il Cavallino Matto, which offers the perfect place to take children who have grown weary of sightseeing in the scenic region. The compact park offers a range of attractions, the majority of which are suitable for the whole family. The Disney-inspired Safari Adventures, for example, takes guests on a trip past animatronic animals, while the Movie Stars Theatre is home to live performances by musicians and circus performers.
Four roller coasters are packed into the 60-acre site. Two of these – Speedy Gonzales and Topozorro – are suitable for even the smallest kids (and vertigo-suffering adults). The others – Wild Mine and Project 1 – are a little faster and taller but still within the comfort zone of most guests. The spinning, swinging Yukatan and the Air Max drop tower offer enough excitement to keep teens and thrill-seeking adults entertained.
Don’t miss: La Bai dei Bucanieri, a “splash battle” boat ride, which sees guests blasting each other with water cannons. The perfect way to cool down on a hot summer’s day! 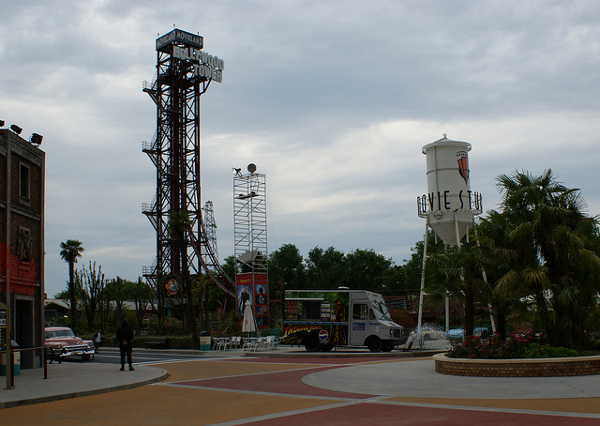 While it’s not on the same scale as movie-themed parks elsewhere in the world (such as Universal Studios Hollywood or Parque Warner Madrid), Lake Garda’s Movieland Park houses a variety of quirky attractions that can’t be found anywhere else. Most of these are located in the theme park itself, although the neighbouring Aqua Studios water park is also worth a visit.
As with other parks dedicated to the magic of movie-making, Movieland Park’s headline attraction is a tour through its “backlot” area. The trams on other tours, though, typically don’t rampage through flaming, soaking sets at the quite the same breakneck speed. Riders could be forgiven for thinking that they are taking part in a genuine chase sequence.
Other highlights include the Hollywood Tower free fall ride, which clearly takes its theming cues from Disney’s famous Twilight Zone Tower of Terror attractions, and a “5D” shoot-em-up attraction based on the Terminator movies.
Don’t miss: The U571 “simulator”, which essentially involves being soaked from head to toe while seated in a mock submarine. Crazy, but memorable. 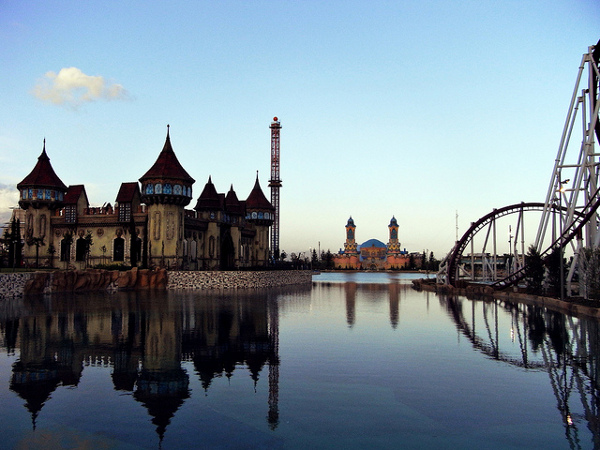 Not many new theme parks have opened in Europe over the past few years, which makes Rainbow Magicland near Rome somewhat unique. Built at a cost of around €300 million, the park opened its gates in May 2011 and sprawls across a 148-acre site. A total of 35 attractions are on offer, spread across six themed lands inspired by Italian production company Rainbow’s childrens’ programmes.
As its name suggests, Rainbow Magicland is aimed squarely at the family market. A variety of cutesy characters are available for “meet-and-greets”, while several junior roller coasters and other rides feature in its roster of attractions. Adults and teens won’t be bored, though – the spinning indoor Cagliostro coaster offers disorienting twists and turns, while the 230-feet-tall drop tower Mystika is not for the feint-hearted.
Don’t miss: Shock – The Steam Machine is an “X-Car” roller coaster that launches riders up to a top speed of 62 miles per hour in just 2.5 seconds. 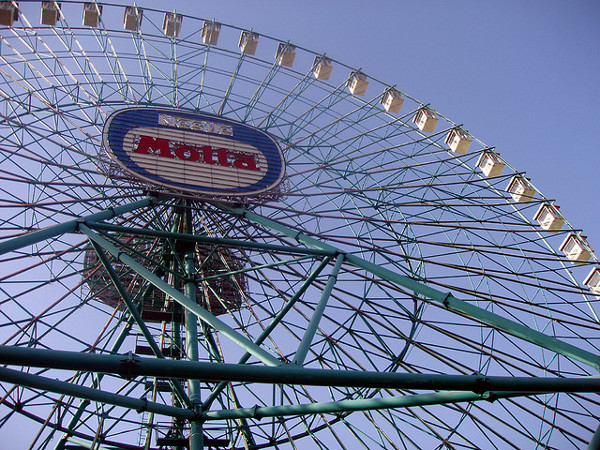 Well established as one of Europe’s best-attended theme parks, Mirabilandia hosts a variety of land-based attractions as well as a 25-acre water park. It offers something for every age group, with a variety of childrens’ favourites being surrounded by a few stand-out thrill rides.
Many guests will rush straight to the launched iSpeed roller coaster, which reaches speeds of over 60 miles per hour and features two gravity-defying inversions in its circuit. Another coaster, Katun, is also popular and sees guests seated in trains that are suspended beneath the track. For spectacular views without the hair-raising drops, try out the Eurowheel, which at 300 feet is the second-tallest Ferris Wheel in Europe.
Don’t miss: Divertical, which will become the world’s tallest “water coaster” when it debuts in 2011. Expect to hit speeds of 65 miles per hour following the 180 feet tall first drop. 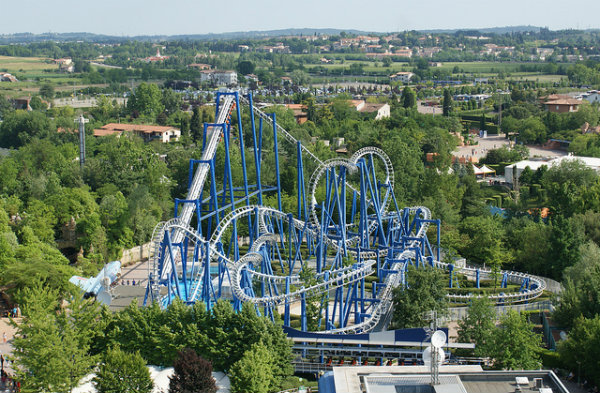 Gardaland is firmly established as one of Europe’s top 10 theme parks, and deservedly so. Conveniently located close to the bustling resorts surrounding Lake Garda, it is one of few parks in the continent that delivers experiences that go beyond the standard coasters and flat rides on offer elsewhere.
Not that Gardaland doesn’t include coasters in its 30-plus attraction line-up. The Blue Tornado inverted coaster is packed with inversions, while the Magic Mountain “corkscrew” coaster has been in place since 1985. For those don’t mind getting soaked, Fuga de Atlantide (Escape from Atlantis) is currently Europe’s largest water ride.
Alongside the traditional thrills, though, are some of Europe’s best-themed attractions. Perhaps the best known is Ramses: Il Risveglio, a stunning interactive dark ride that takes place inside a convincing recreation of an Egyptian tomb. Equipped with a laser gun, you’ll fight off the undead in an experience that is both compelling and addictive.
Don’t miss: Raptor, Europe’s first “Wing Rider” roller coaster, which sees guests seated in “wings” on either side of the train. Some of the near-misses with the surrounding scenery have to be seen to be believed.
Italy’s theme parks are constantly evolving and adding new attractions in order to pull in ever-greater numbers of tourists and locals. Why not fit one in alongside the sightseeing and exploration on your next trip?
About the Author: 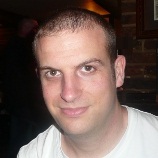 Nick Sim combines his love of theme parks and travel over at Theme Park Tourist. You can find the latest updates and connect with him on Twitter, @ThemeParkNews.
photos by: salvofiguccia, spencer77, Neon Anomaly, Lady Caos, spencer77