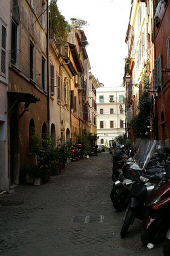 I have a confession to make: I don’t love Rome. I respect Rome immensely, and always enjoy the majority of my visits there, but as yet the city hasn’t found a place in my heart the way cities like Venice and Florence have. Rome usually leaves me exhausted and overwhelmed, and in the past I’ve found it hard to locate those little quiet pockets where I can recuperate from the chaos of the city itself. That is, I hadn’t found a quiet pocket in Rome until my last trip, when I finally made my way to the Trastevere.

The Trastevere (tras-TEH-veh-reh) neighborhood in Rome is located on the opposite side of the Tiber river from the Roman Forum, just south of Vatican City. The name “Trastevere,” in fact, means “beyond the Tiber.” I’d heard travelers rave about it before, namely because it’s the place to go in Rome if you’re young and looking for cheap eats and good nightlife, but in previous visits I’d never made it over there. This time, however, after another glorious visit to St. Peter’s Basilica, I just walked along the Tiber until I got to the Trastevere neighborhood – and it was like a revelation. 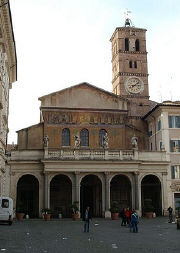 Seriously, not a half-hour before I set foot in the Trastevere, I’d been sitting in a nondescript pizzeria having lunch and jotting a few notes down in my pocket journal. One of them in particular says, “There are no quiet streets in all of Rome, at any time of day.” I couldn’t have made up a more amazing change of opinion if I’d tried, but I literally felt like I’d be made to eat those words the second I stepped off the main street that runs along the river and walked into the narrow, cobbled alleys of the Trastevere. The street noise dwindled to a level where I could easily ignore it, and the only constant sound was the chatter of people eating in outdoor cafes or walking by on their way somewhere. Most of them didn’t look (or sound) like tourists, but they also didn’t seem to have that same frenetic pace that Romans outside the Trastevere had when walking down the sidewalk or barreling down the street on a Vespa. In short, I felt like I’d been transported out of Rome entirely.

The Trastevere’s streets are, as mentioned, narrow and winding (I got lost and walked in circles numerous times – but never minded doing so), lined with predominantly medieval buildings which are mostly residential. There are lots of restaurants here, but I only spotted one hotel. While the Trastevere does have a reputation for some of the cheapest food you’ll find in Rome, it is also notorious for its high rents – so don’t expect discount hotels in the Trastevere. In fact, the only hotel I saw was a really high-end affair. Otherwise, the lodging that I know of in the Trastevere is all apartment rentals.

Now, for me the Trastevere was an oasis of tranquility in the middle of an overwhelming city – but I only visited the neighborhood during the day. The gals who worked the front desk at M&J Hostel (where I stayed) said that the Trastevere is where they spent almost every evening that they weren’t working – and it’s not like it’s very close to the hostel, either – because the pizzas were so cheap (I had a big, tasty pizza for €3) and because the nighttime activity level is fun. 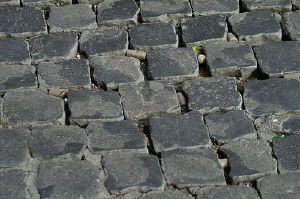 Quite a bit of the “garbage” between the cobbles outside the many restaurants in the Trastevere is wine corks!

I assume that it’s largely crowds of young people in the Trastevere streets at night, and I wonder if the high and narrow alleyways that are so charming during the day would just become echo chambers for street noise later on. But even that potential point in the minus column doesn’t diminish how grateful I was for the Trastevere neighborhood in Rome – and I’d suggest that if you’re feeling stressed out by the city, too, that you make a beeline for the Trastevere. No, it’s not big enough so that you could spend an entire day there exploring, but it’s the perfect place to take a lunch break from the city.

>>See other things to do in Rome

How to Get to the Trastevere
If you’re not staying in the Trastevere neighborhood, you can get there either by walking or by using one of the trams or buses that serves the area. The #8 tram stops on the main street which runs along the Tiber, near the sort of piazza entryway to the Trastevere. Bus H also runs between the Trastevere and Termini station. Do be careful on both the #8 tram and the H bus, as both have a reputation for being heavy on tourist passengers – and therefore also heavy on pickpockets. Read more about the Rome transportation system before you go.