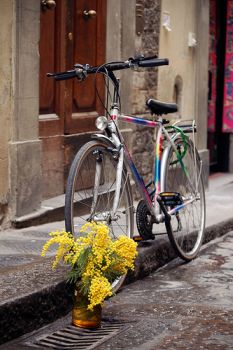 International Women’s Day is celebrated in many countries around the world – notably not including the US – and in Italy it’s known as the “Festa della Donna.” It falls on March 8th every year, and the most conspicuous form of recognition of the holiday throughout Italy is the mimosa (the flower, not the drink!).

Leading up to the Festa della Donna every year, you’ll notice all the sidewalk flower vendors have bunches and bunches of the bright yellow bouquets – and then you’ll see people walking around with newly-purchased mimosa sprigs, on their way to deliver the flowers to a special woman in their lives. It’s not just about men giving flowers to women, either – women give mimosas to their mothers, sisters, friends, and other women who are important to them.

In Italy, a country known for being unapologetically chauvanist, the idea of setting aside one day to celebrate women fits right in with the way women are thought of in general. In more recent years, with the increase in the number of women who work outside the home and therefore take on “un-traditional” roles for women (at least un-traditional by Italian standards), the need for the holiday itself has been called into question.

But politics aside, I suspect that even if Italy one day gets to a point where women are truly considered equals, you’ll still see people around March 8th with a bunch of mimosas in hand, on their way to pay tribute to a special woman in their life.