How to Impress an Italian Guy 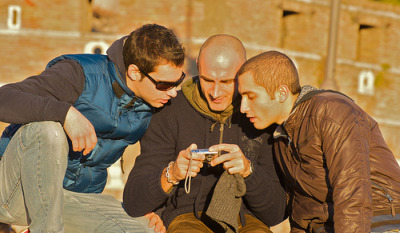 There’s a joke floating around the interwebs that goes something like this:
Q: How do you impress an Italian girl?
A: You wine her, dine her, hug her, support her, compliment her, suprise her, smile at her, hold her, romance her, laugh with her, shop with her, cuddle her, go to the end of the earth for her…
Q: How do you impress an Italian guy?
A: You show up naked. And bring beer.
Now, frankly I think that joke works better for other nationalities where beer is more of a national drink than it is in Italy (not to mention the fact that this joke sort of works for just about any guy on earth, am I right?). But besides that, there are a few things to keep in mind if you’re trying to impress an Italian guy that might not be as straightforward as just “show up naked.”
No, really.
For some people, there’s an attraction to that which is different. The fact that you’re not Italian may well be the thing that makes you stand out and get noticed in the first place. But there’s a difference between standing out and truly impressing an Italian guy. In fact, many of the things that impress Italian girls are also going to impress Italian guys – with a few subtle (and not so subtle) differences. 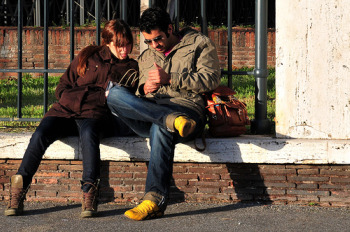 Just as Italian girls are drawn to guys who wear the latest trends, Italian guys are more apt to notice a girl who is dressed well. This doesn’t mean you have to be outfitted in Dolce & Gabbana from head to toe (although that doesn’t hurt, if you can afford it), but it does mean you’ve got to be wearing something that represents what’s in style at the moment.
When you’re traveling, keeping up with the latest trends is tough (and probably silly), so if you’re hoping to win your Italian guy over you might try picking up one new garment – something that’s in the color displayed in every shop window, or a style you see every woman wearing. You can try scoping out the street markets that pop up usually weekly in almost every Italian town – most of them will have a few places selling cheap clothing. Just make sure what you’re buying is inexpensive without looking too cheap.
And despite the Italian woman’s penchant for dressing in a way that might seem more revealing than would be the norm in a Catholic country, wearing anything that’s too overtly sexy sends the wrong message to Italian guys. If you’re looking for a one-night stand, then by all means bear whatever you want to bear. If you want something more long-term, however, don’t wear something that screams, “I’m a loose foreigner.”

This is something that goes for both sexes in Italy, although Italian guys are more traditionally “allowed” to talk about things like politics, business, and religion. This is especially true of older generations, where women were expected to not have opinions on any of those subjects – and especially not to bring them up in conversations with men.
Younger generations of Italian guys are getting used to Italian girls with opinions, but change is a slow process. And besides that, until you know someone better it’s best to stay away from potentially sensitive topics like politics anyway (especially when politics in Italy are so incredibly confusing that it can be hard to figure out what “side” anyone’s on).

Know How to Cook 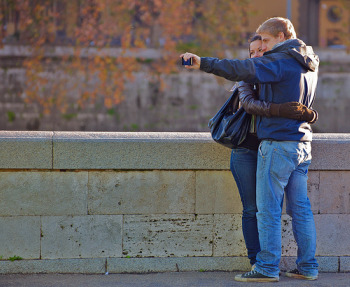 If this seems stereotypical, it is. But it’s true. (There’s a reason stereotypes are stereotypes, after all.) The thing is, there are plenty of Italian men who know their way around a kitchen, too. This is a country that knows and loves its food – so being someone who embraces Italian food and shows an interest in cooking it (the way he says is the right way) is a very good thing.
This tip comes with a caveat, however. Should you get past the first few dates and eventually become a fixture in his family, don’t ever expect your version of his mother’s recipe for anything to be heralded over hers. As far as Italians are concerned, nobody cooks like Mama. Don’t take it personally if he always says her food is best. And what’s more…

Don’t Say Anything Bad About Mom

In Italy, mothers are revered. It doesn’t matter how intrusive they are in their childrens’ lives, they’re still beyond reproach – that is, if it’s not your mother we’re talking about. No matter what your Italian man says about Mama, don’t ever join in the dogpiling. He can say she’s driving him nuts, but you can’t. It’s as simple as that.
And as a side note, Italian men have a reputation as being the quintessential “mama’s boys” – with good reason. Many Italians live at home well into adulthood (largely because living in Italy is so expensive and the unemployment rate is so high), but even if they’re still living with their parents because of financial reasons Italian guys tend to remain folded into Mama’s apron strings long after they should have cut themselves free. They’re so well-taken-care of by their mothers that there’s very little incentive to be more independent, but that’s not going to be of much consolation to you when you’re trying to woo an Italian man who is still (in many ways) a little boy.
Another random-ish side note? Because so many Italians live at home for so long, you’re not likely to get asked back to “his place” when the relationship starts to get amorous. An enormous percentage of Italians reportedly lose their virginity in cars, and an Italian guy’s automobile remains his boudoir for many years.

Be Confident, but Not Too Confident 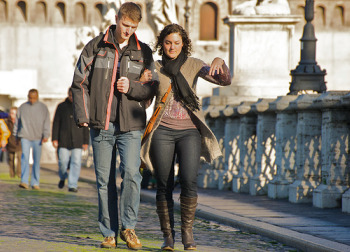 One of the things I love about Italian women is that they’re confident – and, generally speaking, Italian guys expect the girls around them to not be shy. They won’t necessarily expect the same characteristics from a non-Italian woman as they would from Italian girls, but they’re also not going to pay much attention to a shrinking violet, either.
Italians are lively and often loud, so being quiet and introverted means you’re going to fade into the background – and, therefore, not impress any Italian guy (because he won’t even know you’re there). Don’t be afraid to speak your mind, don’t shy away from eye contact, and be sure of yourself overall.
On the flip side, however, don’t be so independent-minded that you bristle when he holds open a door for you. Chivalry is not dead in Italy. In fact, it’s a way of life. You can shower your man with attention, but let him do the same for you – let him treat you the way a gentleman is supposed treat a lady.

Italians seem to know that learning their language isn’t as useful as learning English, Spanish, or even French, so they tend to be extremely pleased when people make an effort to speak a little bit of it. Younger generations in Italy usually speak English more than their parents do, a trend that will continue, but it’s always a respectful gesture to familiarize yourself with a few words and phrases of Italian to impress a guy.
For starters, learn the basic pleasantries. Then, if you know something about him, learn a phrase or two about (for instance) his home region, his favorite Italian soccer team, or maybe even the car he drives. Ask a kind Italian for help with the pronunciation if you want to, but know that even if you stumble over a word or two you’re more likely to endear yourself to him than if you didn’t try at all.

While Italians do go on what you might consider to be a more typical “date” – dinner for two, maybe with a movie – they generally do first date-like encounters in small groups. It’s a way for them to be more comfortable in a potentially awkward situation and it also gives them a chance to check out the friends their would-be date hangs out with.
What this means for you is that you shouldn’t be freaked out if an Italian guy asks if you’d like to meet for drinks and then he shows up with a few buddies. You can either have some girlfriends standing by “on call” to show up at a moment’s notice, or you can demurely ask for clarification beforehand to find out if he’s going to show up alone or if you should bring some of your gal pals along, too. 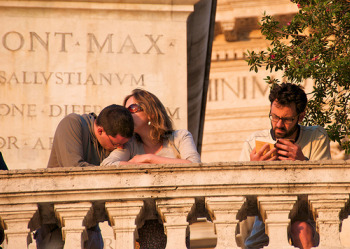 After a long list of tips like this, it may seem strange to find “be yourself” at the bottom – but it’s true. Because if you spend a lot of time and energy changing who you are just to impress an Italian guy, what happens when he likes the girl you’re pretending to be? Above all, while you certainly don’t want to make any cultural faux pas, you want him to like you for who you really are.
Italian guys are up-front about who they are, and they’re going to expect the same from you. They’re more likely to be straightforward when it comes to dating – if they like you, they’ll call you, without worrying about whether calling after one day seems too pushy. The good news is you won’t have to second-guess your Italian guy or try to figure out some hidden meaning to what he’s saying. He’s probably going to be delivering the honest truth, whether you’re ready for it or not.
Thanks to the following people for their help in answering the question “what does it take to impress an Italian guy?”