Hotels in Italy Where Movies Were Filmed 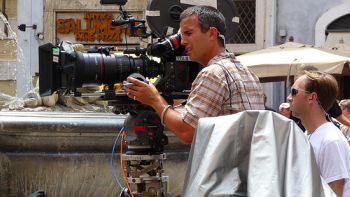 Italy has served as the backdrop for many movies over the years, and you can pretty easily re-live some cinematic moments by throwing a coin in the Trevi Fountain or having a cappuccino at Caffe Florian. A slightly more in-depth way to experience Italy through your favorite films, however, is to stay in the hotels where those movies were made.
Hollywood being the master of disguise it is, not all of the movies that take place in Italy are shot where you think they are. Still, you can find some hotels that feature prominently in movies set in Italy – although in most cases it’ll cost you quite a bit to stay in them.

Hotel Gritti Palace
When it comes to hotels in Venice, you’ll read so many descriptions of places on the Grand Canal that you’ll think they all are – which isn’t true. The Hotel Gritti Palace, however, does overlook the Grand Canal, and it features in the Woody Allen film “Everyone Says I Love You.”
In the 1996 musical film, Allen’s character escapes to Venice after a failed relationship. He checks into the Hotel Gritti Palace, where he meets (and woos) Julia Roberts’ character. In fact, the suite they occupied in the hotel is the Hemingway Suite.
The Hotel Gritti Palace is located on the Grand Canal, roughly across from the Peggy Guggenheim gallery, and it’s part of the Starwood Luxury Hotels collection so it’s either a great place to earn points or a great reward spot to cash them in.
Hotel Europa & Regina
The historic Hotel Europa & Regina in Venice serves as the setting for a tense meeting in “The Talented Mr. Ripley,” between Tom Ripley (played by Matt Damon) and the father of Dickie Greenleaf (played by Jude Law), after Dickie has disappeared and his father travels to Venice to find out what Ripley knows. The hotel is where the elder Greenleaf is staying in Venice.
The hotel is on the Grand Canal, with rooms overlooking the famous waterway and the gorgeous Santa Maria della Salute church. St. Mark’s Square is a short walk from the hotel.
Today’s Hotel Europa & Regina is no less beautiful, and now that it’s a Westin property you loyalty travelers will be able to earn Starwood hotel points by staying here. (Or redeem said hotel points to stay here for free!)
Hotel Danieli
Another luxurious Grand Canal hotel features in the 2010 film “The Tourist,” starring Angelina Jolie and Johnny Depp – the Hotel Danieli. This is the hotel into which the pair check in upon arriving in Venice, although Depp’s character has other accommodation plans and Jolie’s character doesn’t invite him to share the lavish room’s only bed.
The Hotel Danieli overlooks the Grand Canal, and sits roughly behind the Doge’s Palace, making it a stone’s throw from St. Mark’s Square and the famous Bridge of Sighs.
Depp may have slept on the couch at the Hotel Danieli, but you don’t have to. This is another Starwood Hotels property, so save up your points and you can have a room with a bed of your very own.
Hotel Cipriani
This is one of those examples of Hollywood bending the rules a bit. While the Venice hotel interiors in the 2006 James Bond film “Casino Royale” were shot primarily in Prague, Bond and his ladyfriend do pull their yacht into Venice and moor the boat outside one of the most famous hotels in the city – the Hotel Cipriani.
Most of Venice’s big-ticket hotels are in the heart of the city, but the Hotel Cipriani lies on the Giudecca, which is not only on the opposite side of the Grand Canal but even further across a larger canal. It’s possible to see St. Mark’s from the Giudecca, and from many parts of the Hotel Cipriani, and it remains one of the city’s most exclusive hotels.

Hotel degli Orafi
The 1985 film “A Room With a View” takes place largely in and around a hotel in Florence, where two pairs of English travelers swap rooms so that the pair of women may enjoy the rooms overlooking the Arno river (as they were promised by the hotelier). Of course the story doesn’t end with this gesture of kindness (it would be a very short movie if it did), but the hotel remains at the heart of much of the film.
The actual hotel used in the film is Florence‘s Hotel degli Orafi, which is a 4-star hotel near the Ponte Vecchio, Uffizi Gallery, and Piazza Signoria. The hotel does feature rooms with views of the river, as well as rooms without views, so be sure to specify before you book. And if you’d like to stay in the exact room the ladies in the film stayed in, that’s room 414.

Le Sirenuse Hotel
In the 1994 film “Only You,” soon-to-be-married Faith (played by Marisa Tomei) sets off on a wild goose chase in search of a man she thinks she’s supposed to be marrying – who isn’t her fiance – which brings her to Italy. She ends up in Venice and Rome before finally spending some romantic time in Positano, on the Amalfi Coast, in the gorgeous Le Sirenuse Hotel.
Le Sirenuse started as a much smaller hotel in 1951, when it was then a converted holiday home of the family that still owns and operates the hotel. Today it’s a luxury hotel with more than 50 rooms – most of which have a private terrace or balcony overlooking the beautiful bay and sea beyond.

Relais Borgo Scopeto
With a name like “Letters to Juliet” you’d be forgiven for thinking the filming locations were all in Verona, the same setting for Shakespeare’s famous “Romeo and Juliet.” But you’d be wrong. In another act of Hollywood trickery, the hotel where Sophie (played by Amanda Seyfried) stays in Verona is not actually in Verona – it’s in Tuscany.
The beautiful Relais Borgo Scopeto serves as the hotel setting – including the swimming pool – for “Letters to Juliet,” although the villa is near Siena, hundreds of miles away from Verona. There are nearly 60 rooms in the hotel, and the extensive property surrounding the villa includes tennis courts and two swimming pools.
photo by Blue Serge