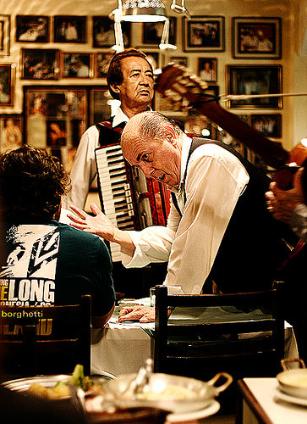 Whenever I travel in Italy, I like to pick up a music CD or two of Italian artists I have trouble finding in the United States. I also often listen to Radio Italia on my computer to learn about new songs and artists I might want to check out. But what if you’re planning a trip to Italy and you just want a few Italian songs to put you in the traveling mood? Or what if you can’t be in Italy right now and you want to transport your ears there for a little while? It is for you, then, that I’ve created this Soundtrack for Italy.

The playlist here is a combination of newer Italian songs I really like, and classics that most every Italian will know – and it should transport you right to Italy (audially speaking, at any rate). Below the playlist box you’ll find a listing of all the songs I’ve included along with links to where you can buy a CD if you like it! Some of these CDs aren’t available on Amazon’s US site, so there are some links to the Amazon UK site – which will cost more in shipping, so keep an eye on that.

In addition to links of where you can buy these CDs (or song downloads, in some cases), I’ve also put links to translations of these songs wherever possible. I can sing along to parts of most of these songs, but I don’t know most of the words or bother to translate them myself. I just enjoy them for the music, humming along where I don’t understand lyrics. So if you’re not interested in what the songs mean, don’t worry – you can still “sing” along anyway. And keep in mind that many of these translations are done by computers instead of humans, so they’re, umm, funky at times. You’ll see what I mean.

Without further ado, have fun listening to my Soundtrack for Italy!

A couple classic Italian songs that didn’t make it onto the list (because they weren’t among the files I could choose from) but which would definitely have made the cut are:

As mentioned earlier, for most of these songs I don’t exactly pay attention to what the lyrics mean… So if you find a better translation than one I’ve listed (or find a translation for a song I don’t have translated), or want to correct me on any of this stuff, please do!

original photo at the top by !borghetti