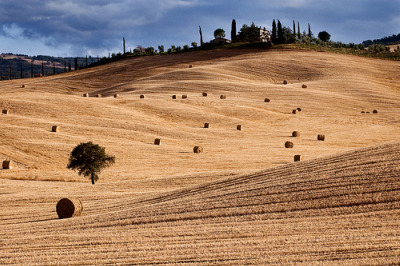 Florence is one of those compact, walkable, and packed-with-tourist-sights cities that makes it easy to overlook the idea of taking a day out of your stay to venture anywhere else. Not only that, there are so many idyllic Tuscan hilltowns around Florence where you might want to actually stay a few days, a quick day-trip to any of them (or all of them, for that matter) might not interest you.
Still, if you’re trying to limit the number of times you transfer to a new hotel, staying in Florence long enough that you’ve got time for a day trip or two, or are just tired of Florence and want a change of scenery, you’re in luck – the options for day trips from Florence are plentiful.
As mentioned, many of the most popular day trips out of Florence are Tuscan hill towns. Depending on your opinion of towns like this, you may want to just pick one (the smaller ones especially can lead to a serious case of deja vu) or you might enjoy discovering the sometimes slight differences between them (at least they’re slight to visitors!). But even if you’re tired of small-town Italy, there are other options for day-trips from Florence that’ll give you a chance to see something a little more different.
One thing to keep in mind with these Florence day trips is transportation. There are some truly lovely places around Florence (all over Italy, really) which aren’t easily accessible without a car. So if you’re limited to getting around via public transportation, the first thing you’ll want to figure out is whether a town has a train station (makes for the easiest day trip) or bus service (a very close second to trains in terms of ease). If you’ve found a spot without train or bus service that you absolutely must visit, then renting a car for a day is always an option.
This is by no means an exhaustive list of day trips from Florence, and if I’m missing your favorite please let me know in the comments!