Getting from Venice to the Cinque Terre (and Vice Versa) 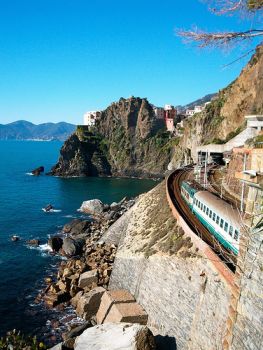 Let’s just say you’re on your first trip through Italy and you’re using my “Perfect 2-Week Italy Itinerary” as your guide. You’ve had a glorious introduction to the country through the seemingly-impossible dream-like qualities of Venice, and now you’re ready for the second stop on your trip – the five tiny towns of the Cinque Terre on the Ligurian coast. You’ve heard about them for years, and all your friends have told you that you simply have to see them. But you peeked at a map of Italy and they look a little remote. How, exactly, do you get there?
That’s what I’m here for.
Your map-peeking served you well, because getting to the Cinque Terre from just about anywhere – save for another Ligurian coastal town, perhaps – can be a bit of a puzzle. Look at an Italy map again and you probably won’t be surprised if I tell you that the trip from Venice to the Cinque Terre isn’t typically a direct one, either. But it can be done, and it is done, countless times every year.
I’m going to cover your main options for how to get from Venice to the Cinque Terre in this article, but you’ll notice one glaring omission on the list of transportation modes covered: buses. Other articles I’ve written about getting from place to place in Italy have covered buses, so why not this one? The Italian bus network isn’t one big national network, so as soon as you leave one region of the country for another one you enter into the confusing world of trying to connect dots on the network maps of two bus systems that don’t typically overlap. It’s an exercise in frustration waiting to happen. So stick with the options I’ve listed below, and you’ll be fine.

Taking the Train from Venice to the Cinque Terre 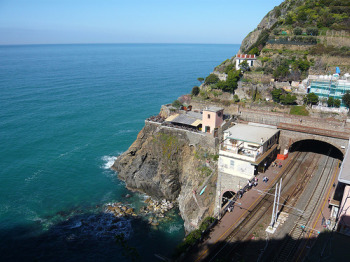 You don’t have to read through many of my transportation-related articles on this site to learn I’m the girl who loves taking the train. I’ll tell you when it’s not the best option, or at least when there’s something else comparable, but if the train’s the best way to get from one city to another I’ll say it with extra glee. So, I hope you can hear the extra glee in my voice when I say that getting from Venice to the Cinque Terre is easiest if you take the train.
When I last looked at this trip, there were two routes for trains that connect Venice with the towns of the Cinque Terre – I see there’s a third option now, which I’ll include underneath the two I already knew about.
Whichever you choose will depend mainly on your preference and what suits your travel style best. The main difference between the routes is that one requires two train changes, and two require only one train change. The time the journey takes is roughly the same (less than a 30-minute difference, and the 2-change route is actually the faster one), as is the cost of a ticket.
The first 1-stop journey is from Venezia Santa Lucia station to Milano Centrale station in the big fashion and banking city of Milan, and then from there straight on to Monterosso (the northernmost town of the Cinque Terre). This particular route runs 3-4 times per day and takes about 6.25 hours all together (including the roughly 30-minute wait at Milano Centrale). A first-class ticket costs €71, and a second-class ticket costs €52.
The 2-stop journey is from Venezia Santa Lucia station to Firenze Santa Maria Novella in Florence, then onto Pisa Centrale, and finally on to the Cinque Terre. Other options include substituting Sarzana or La Spezia for Pisa. These trips take between 5.5-5.75 hours, depending on the exact route and time of day. A first-class ticket can range from €73-77, and a second-class ticket can range from €51-57.
The newer (at least newer-to-me) 1-stop journey is from Venezia Santa Lucia station to Bologna Centrale, and then from there straight to Monterosso. This journey takes about 6 hours all together, including the roughly 40-minute stop in Bologna, and it’s actually the cheapest of the three – a first-class ticket is just over €61 and a second-class ticket is just over €42. It appears this only runs once per day, and since it doesn’t even get into Bologna until nearly 5pm it’s not necessarily ideal for making that a 2-hour detour in Bologna before you continue on to the Cinque Terre – but if you’re so inclined, you can find a place at the Bologna station to stow your bags and walk around the city, tour a church or two, or (and this is what I’d recommend) get a meal before you go back to the station and get on a later train to Monterosso. There are trains leaving Bologna for the Cinque Terre town about once per hour (some of which require a further train change, so keep that in mind) – but the last one leaves around 7pm, so be careful you don’t miss it!

Driving from Venice to the Cinque Terre

I am including the option of driving to the Cinque Terre from Venice, because technically of course it can be done, and because I know plenty of people who just prefer to have their own set of wheels when they’re on vacation. But even though all the train trips I’ve outlined above require at least one train change – which probably sounds like a hassle – that pales in comparison to the hassle of driving a car between two places that were really not meant for cars.

Venice, for starters, is a no-brainer. You can’t drive there. There are no roads. So if you were to want to drive from Venice, you’d have to get to the mainland and rent a car there. The whole middle part, driving from the mainland down through the middle of Italy, would probably be really enjoyable if you’re someone who likes to drive and if you’re comfortable enough driving in a foreign country that you don’t feel you have to stick to the highways. Taking Italy’s back roads can be a blast – as long as you’ve got an excellent driving map or a GPS system. Italy’s highways can be quick, or they can be nightmarishly backed up.
But if you enjoy the drive through the midsection, getting from the main roads to the Cinque Terre is where it starts to get hairy. On the map it looks like quite a short distance. In reality, the winding and narrow roads take much longer to navigate than you think they will. And then you’ll have to park the car at the top of the town you’re staying in and walk the rest of the way (or get a shuttle, if that town has them and they’re running when you arrive) with all your luggage, as the towns are essentially car-free in the center, too. You can plan on paying roughly €20 per day to park, plus another few euro to ride the shuttle each time.
Should you still want to make the trip, the Via Michelin site that I love for driving directions in Europe says their recommended driving route is just under 400km (of which nearly 360km is on the highway), will take you roughly 4.75 hours (with no traffic), and cost about €30 in tolls. Their route takes you southwest past Ferrara and into Bologna, then northwest to Parma, and southwest again to the Cinque Terre. 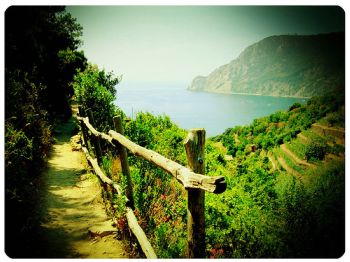 Here are some articles I’ve written and some other information that might be useful for when you’re in the Cinque Terre: