How to Get from Amsterdam to Milan (and vice versa)

Since flying directly to Italy from North America is often more expensive than flying into other European hubs, one option for saving money on your airfare is to book a flight into a different city in Europe and then fly from there into Italy. Although the city of Amsterdam may not be one of the biggest in Europe, its airport – Schiphol International – is a big enough hub that you can sometimes get lucky finding cheap flights to Amsterdam. Getting from there to Italy is a breeze.
The Amsterdam-Milan route is the one I most often fly, and it’s popular with business travelers as well – but you don’t have to be going to Italy on business to start your trip in Milan. It may not be everyone’s favorite Italian city, but it’s an excellent starting point for holidays that include the Italian Alps, food-centric Piedmont region, the Italian lakes, and any of the shopping you can imagine in central Milan.
A straight-as-an-arrow route from Amsterdam to Milan is roughly 515 miles, but of course the only way you’re getting even close to that route is by flying. The other potential transportation methods listed below are for much longer journeys. The main question you need to answer when deciding which of these methods is right for your trip is this – which do you have more of, money or time?

Flying from Amsterdam to Milan 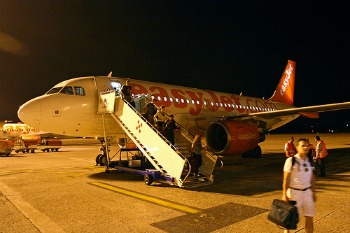 If you’re limited at all time-wise, then flying is definitely your best bet. Flights from Amsterdam to Milan take about 1.5 hours (if they have no stops), and there are a few low-cost airlines that make the trip regularly which helps keep the cost down.
Budget airlines flying between Amsterdam and Milan are easyJet and Vueling, which both fly to Malpensa. Airlines that fly from Amsterdam to Milan’s smaller airport, Linate, include Alitalia, KLM, and Lufthansa – these are the bigger airlines, so tickets are more expensive on these carriers.
Tickets from Amsterdam to Milan can be as little as €35 one-way on easyJet, although they’re routinely in the €70-90 range. And if you happen to catch one of those spectacular deals on easyJet, even better. Tickets on the larger airlines are more likely to be in the €200+ range, even for one-way trips. Round-trip tickets on easyJet are usually under €150; round-trip journeys on the bigger airlines tend to be much less than double the one-way rate, so you can sometimes find a round-trip flight on a major airline for under €200.
Search for airfare from Schiphol to Malpensa:

Taking the Train from Amsterdam to Milan

ShowBookingWidget();
Traveling by train around Europe is one of those things everyone wants to do – and there are some journeys that aren’t really ideal for train travel anymore. Amsterdam-Milan is one of them. Yes, you can do it, but it’s a long train trip, it’s usually cheaper (not to mention faster) to fly these days, and the journey is so long that even sites that allow you to book tickets in advance require you to break the trip up into segments booked separately.
Still, if the train is your top priority, here’s what you need to know.
First, you’ll take the train from Amsterdam to Paris. This part of the trip is only about 4 hours, and tickets tend to be in the neighborhood of €80 for a seat in a second-class car.
Once you get to Paris, the next part of the journey is to take the train from Paris to Milan. This is a trip of roughly 7 hours if you can get an itinerary that doesn’t require any changes, and up to 9 hours if your trip requires a change somewhere along the way. Tickets for this leg will be in the $100-170 range for the train with no changes, and as much as $400 for a trip that does require changes.

Taking the Bus from Amsterdam to Milan 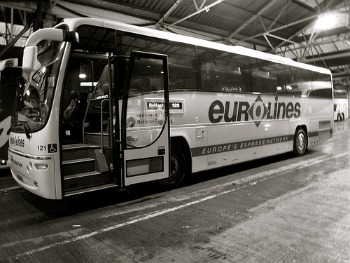 If you thought taking the train from Amsterdam to Milan was a leisurely journey, that’s nothing compared to taking the bus – but going by bus is extremely cheap, which is a godsend to anyone traveling Europe on a serious budget.
The bus company that will get you from Amsterdam to Milan is Eurolines, a collection of individual European bus/coach lines that cross borders into other countries. The trip from Amsterdam to Milan on Eurolines takes just under 24 hours, and thankfully doesn’t require you to change buses along the way. The lowest fare for this route (if you catch a sale) is less than €30 one-way – but even the full-price fare is only €85.

Driving from Amsterdam to Milan 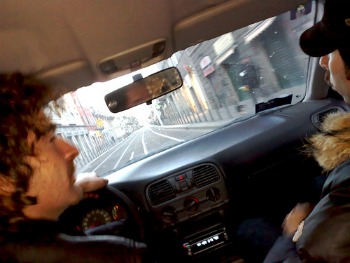 Should you be at the helm of a car, you might want to drive from Amsterdam all the way to Milan. With so many interesting stops along the way, I’m hard-pressed to think of a vacation situation in which this would be the best option. Sure, if you’re traveling on business and you can’t fly back and forth, then you won’t be stopping en route for photo-ops or sight-seeing – but if you’re on holiday, zipping down a highway through Germany, France, and Switzerland without planning to meander sounds like not much fun to me.
Of course, if this is the way you’re going, then I’m here to give you the information you’ll need.
Assuming you don’t run into traffic or other diversions, the drive time from Amsterdam into Milan is about 10.5 hours (not counting any stops you might need to make). According to the website I always consult for driving directions and helpful information, Via Michelin, the trip will cost you more than €100 in fuel and a total of €133 including tolls and road taxes.
These are estimates based on simply plugging in city names, so you’ll get the most accurate driving directions by putting in the address from which you’re leaving and the address to which you’re going.

Now that you’re in Milan… 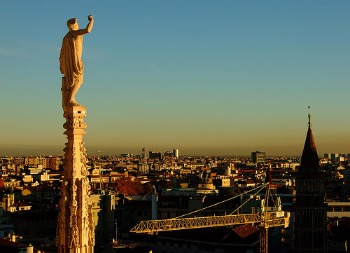