How to Get from Italy to Sicily (and Vice Versa) 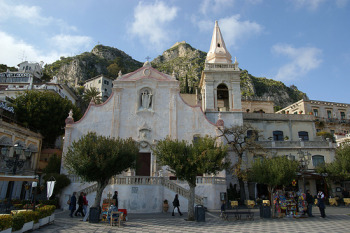 Let me start off here by saying the title of this article is more than a little confusing. If you’re saying, “How to get from Italy to Sicily? Isn’t Sicily part of Italy?” the answer is yes – and no. As you’ll remember from your brief introduction to Italian history, Italy didn’t become a unified country until 1861. Prior to that, Sicily was one of many independent city-states, and there’s still quite a bit of the “I’m Sicilian first, Italian second” mentality – as there is with other parts of Italy, too.
But practically speaking, the title of this article really refers to the notion that getting to the island of Sicily requires a jump from the Italian mainland. There’s long been talk about building a bridge across the Straits of Messina that would more easily connect Sicily with Italy’s mainland, but between political promises made during campaigns (which are conveniently forgotten post-elections) and the fact that there are some people on both sides of the strait who would just as soon not have the two land masses more easily connected, I’m not sure such a bridge will ever be built. Until then, therefore, your options for getting from Italy to Sicily – or vice versa – are listed below.
Please Note:
Because this is an overall article about coming from Italy – anywhere in Italy – I’ve had to generalize more than I usually do on these articles. You could, after all, be just about anyhwere on the mainland. I’ve done my best to outline your options for getting from the mainland of Italy to Sicily in this article, and if I’ve missed something or left something out please let me know… But if it’s just information about your specific route you’re looking for, I’m hoping I’ve given you the tools in this article so that you’ll be able to find the information you need on your own.

Flying from Italy to Sicily 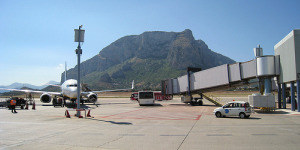 Depending on where you’re starting from in Italy, your best bet in terms of both time and money might be to fly to Sicily. There are a few airports on the island, although there are three in particular you’ll want to look at for flights from both the Italian mainland and elsewhere in Europe.
The airports to check are in Catania (CTA), Palermo (TMO), and Trapani (TPS) – and your airline options will vary for each arrival airport (not to mention the airport you’re closest to on the mainland).

Some examples of flights I found as I was writing this are:

>> Read more about budget airlines that fly to Sicily, especially if you’re outside Italy to begin with.

Taking a Ferry from Italy to Sicily 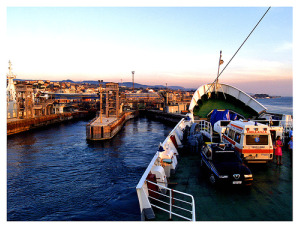 As you read above, there is not currently a bridge that stretches over the water from the mainland of Italy to the island of Sicily. What that means is that any form of transportation listed here other than flying will involve going on a ferry boat at some point. Luckily, the ferries that connect Italy and Sicily are the kind that take entire trains (not to mention cars and buses) on board, making your trip easier to deal with.
There are several different ports on the Italian mainland from which you can sail to Sicily, and obviously you’ll pick the departure point that’s closest to you. But keep in mind that not all of the ferry departures can accommodate cars or trains, so if you have a particular mode of transport in mind then you’ll want to make sure that will be available at the departure city you’re targeting. Another thing to factor in is how many sailings per week there are from various points. Some have 3-7 per week, some have more, some only have 1. All of this is to say that your ferry crossing is something you’ll want to research in advance so you don’t end up spending an extra week somewhere you don’t want to be.
Some of the departure ports on the Italian mainland with long-haul ferry service to Sicily are Naples, Civitavecchia, Genoa, Salerno, and Livorno. There are quite a few ferry companies that connect Italy’s mainland with Sicily, but a few names to look for include SNAV, TTT Lines, Tirrenia, Grandi Navi Veloci, and Grimaldi Lines. Because the potential departure cities are some distance from one another, the ferry travel time varies significantly. The longer crossings are in the 19-28 hour range (from Genoa or Livorno to Palermo or Catania), and there are several in the 8-14 hour range.
As with everything else on this list, prices for the ferries will vary depending on where you start out, where you’re going, and what mode of transport you’re using (i.e., driving a car onto a ferry, taking the train onto a ferry, being a walk-on traveler, etc.). Here are a few prices to see as samples, but there are too many to list here – be sure to check with the port where you are for the most updated ticket price information. (And consult the information above about taking the train, since your train ticket covers your ferry crossing, too.)

If your last stop on the Italian mainland is in Calabria, the region in the toe of the boot that’s closest to Sicily, the ferry situation is different. Ferries run more frequently, are cheaper, and don’t typically require reservations the way the ferries listed above do. You can drive a car on or walk on, assuming there’s space, and the trip from Villa San Giovanni or Reggio di Calabria on the mainland to Messina on Sicily takes about a half-hour. Two ferry companies to look for are Meridiano Lines and Caronte & Tourist, and some prices are:

Taking the Train from Italy to Sicily 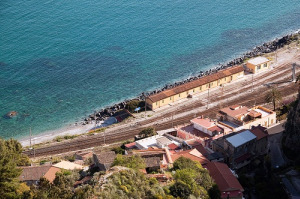 Although there are very good reasons for renting a car in southern Italy, you can definitely get around much of the region by sticking the train routes – and that includes getting across the water to Sicily. Taking the train between Italy and Sicily is a fairly unique experience, too, as the trains roll right onto ferries and then back onto train tracks on the other side of the crossing. You never even have to leave your train seat if you don’t want to.
Trains cross the Straits of Messina between Villa San Giovanni on the mainland and the city of Messina on Sicily. As mentioned, you can stay where you are on the train if you like – but it’s widely recommended that you make the trip up onto the deck of the ferry to catch the beautiful views. The crossing is often done as night is falling, so you may get treated to a spectacular sunset. Just be sure to note the number of your train car and pay attention to where you came from, as getting back to your train can be a little challenging.
The prices on train tickets from Italy to Sicily will vary depending on where you’re coming from and the speed of the train you want to take, but here are some sample prices:

As you can see, while I’m usually someone who’ll advocate for taking the train above all other forms of transport in Italy, the passage from Italy’s mainland to Sicily isn’t necessarily one of those times. Sometimes there are great deals on tickets running, and it can’t hurt to check, but if you’re not already in Calabria (making your train trip much shorter and cheaper) you may find that taking the train isn’t the best option for you.

Driving from Italy to Sicily 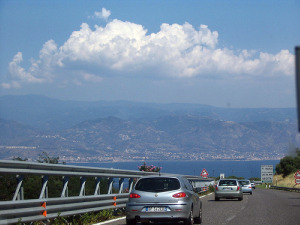 Since you could be coming from anywhere on the Italian mainland, and since you’ll be headed for one of the various cities listed above under the ferry information so you can drive your car onto a ferry bound for Sicily, I’m not going to re-hash all of the ferry information here.
I suggest that you use a good GPS system or look up a route on Via Michelin (and have a good driving map with you). That way you can plug in exactly the address you’re departing from and get the most accurate driving directions to the city where you’ll sail to Sicily. And don’t forget to read all about what you should know about driving in Italy before you get there.

Taking the Bus from Italy to Sicily 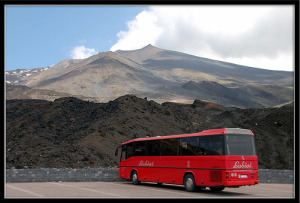 There are some long-distance buses in Italy that you can take from various points on the mainland to a couple of the major cities on the island of Sicily. SAIS Trasporti buses are the ones that will get you from your last stop on the Italian mainland to Sicily, but you’ve got to get to one of their departure points first. If you’re on the SAIS website (in Italian) you can technically book a trip all the way from Milan to Catania, but what you’re booking in that case is a train trip to Rome and then a bus trip from Rome to Sicily. So here is the information for the SAIS bus trips leaving from Rome and Naples heading for Palermo and Catania.

The prices on these bus trips, as you can see, are definitely budget-friendly for anyone who’s on a real shoestring traveling through Italy. I’m not sure the transport times are to my liking (especially without a cushy berth on a train or a ferry), but if you’re one of those lucky people who can sleep anywhere and not wake up stiff and sore then you might not mind at all.

Now that you’re in Sicily…

Here are a few links to resources that may help you plan your trip to Sicily.