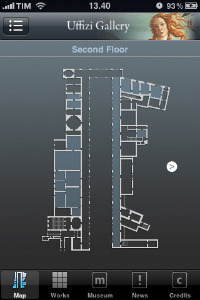 Florence may be known as the birthplace of the Renaissance, but in the 21st century it’s gone high-tech. Well, at least the travel guides to Florence and Tuscany have gone somewhat high-tech. In addition to the more general Italy travel guides you can find available for the iPhone these days, there are also a host of Tuscany and Florence iPhone apps that make great travel companions for anyone visiting this most popular Italian region.
Before anyone can ask, I’d like to point out that yes, Florence is the capital city of the region called Tuscany. You may very well be visiting only Florence and not venturing out into the countryside at all, but some of the Tuscany iPhone apps include information that’s applicable to Florence as well.
>> As is the case with the lists I’ve made on Rome iPhone Apps and Venice iPhone Apps, I’m not going to include apps on this list that are more generally about the Italian language or traveling through Italy. You’ll find those in the Italy Travel iPhone Apps list I wrote earlier in the year.

Florence Explorer
$2.99
This app is very easy to navigate, sort-able by category, cost, and district (among other things), and lays every place discussed on a Florence map. In this guide, there’s an emphasis placed on budget, so rather than just over-arching categories for “accommodation” and “dining,” each is broken down into several sub-categories based on the amount of money you want to spend. All of the main attractions are included, along with several lesser-known ones, there’s a separate category for gelaterie, and the app will certainly help you avoid walking into a restaurant only to find out it’s way beyond your price range.
Instant Florence
$2.99
Written by award-winning travel guide writer Donald Strachan (who also wrote the Instant Turin iPhone app), Instant Florence doesn’t cover every single attraction or monument in the city, but it covers the best the city has to offer – as well as plenty of hidden gems – so that it’s ideal for most visitors. Categories in the app include The Best Museums, Florence for Free, Trips Out of Town, and Family Fun.
Lonely Planet Florence
$5.99
Lonely Planet is one of the most popular travel guidebook companies, and although their iPhone city guides are full of good information I find them to be confusing to navigate. The Florence app is crammed with the same good stuff you’d get if you bought the book version, and if you spend a little time browsing the categories before you leave home (even on the flight to Italy or train to Florence), you’ll be better able to track down what you need when you need it. Still, the iPhone app weighs less than a book, and at $5.99 it costs less, too.
Florence Street Map Offline
$4.99
I’m a fan of these paper pop-out maps of Italy, but if you’re consolidating everything into your iPhone then this offline street map of Florence may be what you’re looking for. As the name suggests, it’s available entirely offline so you not only won’t need a data or phone connection (and will therefore avoid roaming charges), the app works just as well on an iPod Touch as an iPhone. If you are using GPS on either device, however, you can use the app to locate yourself on the map.
Florence Walking Tours and Map
$4.99
Contained in this one app you’ll get seven different walking tours of Florence, each of which contains 5-10 sights. The tours include detailed route maps and descriptions of each attraction (photos and text pulls from Wikipedia, just so you know), and there are written turn-by-turn directions to get from one stop on the tour to the next.
Florence In My Heart: Audioguide for Travellers and Tourists
$4.99
This app has 12 different audio tours for 12 different attractions in Florence – including the Duomo, Duomo Square, the Ponte Vecchio, Palazzo Pitti, and San Miniato al Monte. The tours provide instructions for moving from point to point on each tour, and then the audio files let you look at what you’ve been led to without needing to read about it on your iPhone. The app will also direct you to where to start each tour using the phone’s GPS feature.
Michelangelo in Florence
$1.99
If it’s Michelangelo you’re most intrigued by in the Renaissance city, then this might be just the app for you. The app includes a city map with all of Michelangelo’s works pinpointed on it, suggested Michelangelo-centric itineraries, visitor information for all the museums housing Michelangelo’s works, and a bit of information on each of the works of art themselves.
Uffizi
$1.99
The official Uffizi iPhone app is a guide to Florence’s top museum, but it’s more than that – it includes a gallery of more than 30 of the museum’s most famous pieces, with detailed information on each one, so it’s a great way to get acquainted with what you’ll see (and understand its importance) before you even arrive. The app also has a museum map and information about ticket prices and open hours.
Uffizi Touch
$5.99
This isn’t an official museum app, but it serves many of the same purposes. This app is navigable by time period, museum room, artist, or a short list of the museum’s masterpieces. In each case, the art is the focus, with images of many more pieces in the museum’s collection than the official Uffizi app contains. There are very high-resolution images available if your phone is connected to WiFi, too, which is ideal for zooming in much further than you can in the museum itself. Touching the “i” on each work of art gives you more information about the piece, so you can use it while you’re touring the museum or when you’re back home reviewing what’s at the Uffizi. I’m not sure you’d need to have both this and the official Uffizi app, so how are they different? This one contains far more artwork, and the official Uffizi app contains visitor information for the museum itself. You’ll need to figure out which of those things is most important to you to have in an app.
Note: I was given a code to try this app for free, but my opinions are my own.
Accademia Gallery
$3.99
This app was developed by the same people who have what they’re calling the “official guide” to the Uffizi (although I think it’s a second “official” guide, if it’s official at all) – it looks like a good app for one of Florence’s other major museums, but to be perfectly honest the Accademia is a very small gallery and the vast majority of the people who go in are there to see one thing only: the David. So unless you’re more curious than the average traveler about the other works of art contained in the Accademia, you might want to skip this app and get the baic Accademia information in one of the city guides listed above.

Tuscany+
FREE
The Tuscany+ iPhone app uses oh-so-hip augmented reality to let you know what’s around you. Using the iPhone’s camera and GPS features, the app gives you information about attractions you’re seeing and points out nearby hotels, restaurants, and other points of interest/usefulness. Because of the features they use, augmented reality apps like this one only work on the iPhone 3G or 3GS, but the app itself is free and it ranks very high on the cool-ometer.
Florence City Travel Guide
$4.99
The Florence City Travel Guide is another augmented reality app that uses the iPhone’s camera and GPS to not just tell you but show you what’s nearby. Despite the city-specific name, however, this app works in eight Tuscan cities – Florence, Pisa, Lucca, San Gimignano, Arezzo, Fiesole, Lucignano and Siena – and includes itinerary suggestions along with tips on hotels, restaurants, shopping, nightlife, safety, and even some useful Italian phrases (with audio examples). And best of all, the app works perfectly well without even needing to use the augmented reality part – so if you don’t have an iPhone 3G or 3GS, you can still use most of this app.
Italia! Guide to Tuscany
$7.99
This app comes from the people who bring you the exceptionally pretty Italia! magazine, and it includes restaurant reviews, a food- and wine-centric tour, and even a few regional recipes. It’s a very pretty app, containing mostly Tuscany-related articles from the magazine – so although it can be useful in helping plan a trip (and certainly to inspire one), it’s probably not the only guide to Tuscany you’ll want to have.
Siena Walking Tours and Map
Pisa Walking Tours and Map
$4.99 each
The same company that makes the Florence Walking Tours and Map app listed above also makes a similar app for Siena and one for Pisa. The Siena app includes six tours, each of which has 6-10 sights, and the Pisa app includes eight tours, each with 6-7 sights. They’re available entirely offline, although if you want to use the “Find Me” feature to make sure you’re not straying off course, you’ll need to be using the phone’s GPS system.
Pisa Street Map
$1.99
This street map of Pisa is available entirely offline, so it doesn’t require any internet or phone connection and even works on an iPod Touch. If you’d like to, you can turn on the GPS function on your iPhone to have the app show you where you are on the city map – but it’s not required to use the basic map functions.
Island of Elba
FREE
If you’re venturing off the Tuscan coast to explore the islands, chances are good you’re headed for Elba – in which case you’ll want this app. The app includes highlights of the island, information on all the beaches, as well as information on hotels, restaurants, weather, and a map to help you get around.
Tower of Pisa Inclinometer
$0.99
This app really has almost nothing to do with the Tower of Pisa, since all it’s designed to do is measure the angle or slope of whatever you’re looking at through the iPhone’s camera – but since it uses Tuscany’s most famous monument in its name, and since you can use the app to measure just how far the leaning tower is actually leaning, I’m including it for fun. If there’s a science geek in your travel group, or a kid who’d find measuring the lean interesting, then I’d guess it’s worth the 99 cents. (What’s more, if you’re traveling other places in Italy you can use this app to demonstrate that there’s more than one tower in the country that leans.)