Itinerary for 2 Days in Venice

One of the most popular articles on this site since its inception remains my suggested two-week itinerary in Italy. And since there’s a contingent of visitors to that page who clearly crave more detail (just scroll down to see all the comments I’ve gotten asking me to opine on itineraries!), I thought I’d start breaking out that itinerary into a few articles concentrating on each point along the way.
Toward that end, here’s the first in a new series, since it’s the starting point for my two-week itinerary – what to do with your two days in Venice.
Quick search for flights to Venice: 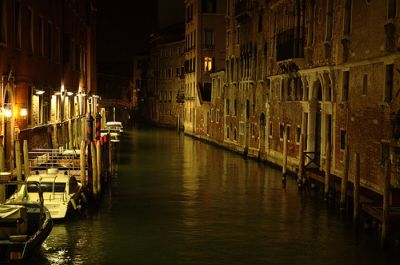 I know that the vast majority of travelers think of Venice as a day-trip destination, either taking the train in from another Italian city or pulling in to port on a massive cruise ship. Whenever people listen to me, I always recommend against this.
For starters, the cruise ships are doing damage to the Venetian lagoon (and therefore the city itself), so if you can avoid cruises that have Venice as a port of call you’re already doing the city a great service. But beyond that, the magic of Venice is much harder to experience when you have very limited time and when you aren’t spending the night. The best times of day in the city – without question – are the early morning (before the day-trippers arrive) and the late evening (after the day-trippers leave).
If you’re driving to Venice and back (which I don’t recommend, by the way), you have more flexibility to get there early and leave late for a long day-trip – but if you’re relying on public transport, your options aren’t going to allow you to get bewitched by Venice. So take my advice, spend at least one night (not on the mainland, either) and plan on two full days in the city.

Day One in Venice

You’ve just arrived by plane into Venice’s Marco Polo Airport, and it’s relatively early in the day. You’ll gather your bags and pull your groggy self toward the exit. You’ve read about how to get from Venice Airport into Venice, and you’ve decided which method of transportation makes the most sense for you. You’re also armed with the necessary information from your hotel or hostel, who told you which vaporetto (water bus) stop was closest to their front door.
In most cities, your first order of business upon arrival is to chuck your stuff in your room and get back out to actually see the city. In Venice, you get to see the city before you even see your hotel. Assuming you’ve cleverly chosen a water transport method, secure a place by a window so you can see Venice come into view as you make your way across the lagoon from the airport. If you’ve splurged a bit on a water taxi, you’ll appreciate the ability to poke your head out of the top of the boat so you can really get a look at things. Have your camera ready. You’ll need it.
After you eventually check into your Venice hotel and put your bags down, resist the urge to crash for a nap. I know you’re jetlagged, but I hope the impossibility of the canal city has captivated you upon your entry and you’re eager to explore. Because that’s what you’ll spend the rest of the day doing. 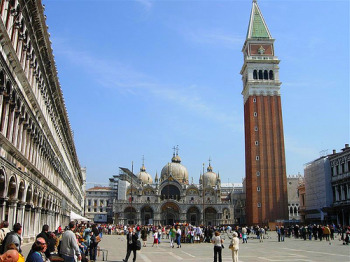 Depending on when you’re visiting Venice, you may find that the lines to get into the city’s top sight – St. Mark’s Basilica – aren’t too long when you wander by. If that’s the case, jump at the chance to visit this amazing church. It’s my favorite church anywhere (so far, at least), and it’s worth an hour (if you visit all the mini-exhibits within the basilica, that is, including taking the steep staircase to the roof where you can look over the square).
If you’ll be in Venice duruing the high season, you might look into booking a free reservation time to get into St. Mark’s Basilica – it’s free to enter, and free to book the entry time. You get about a 15-minute window in which to enter, and you just show your reservation code to the guard to bypass what can be quite a long line.
Along with a spin through St. Mark’s, the other attractions to visit during your first day in Venice are the Doge’s Palace (right next door to St. Mark’s, and worth the admission if for no other reason than it’s the only way to walk over the famous Bridge of Sighs) and the Campanile (bell tower) in front of St. Mark’s (you can take the elevator to the top for a view over the basilica), but otherwise your first day in Venice should be spent getting as utterly lost as you possibly can.
I’m serious. 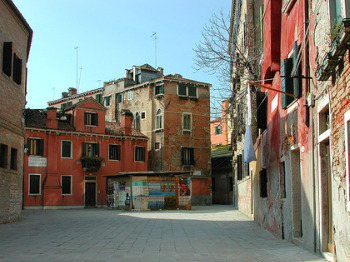 See the direction the bulk of the crowd is going? Turn left. Or right, if left would put you in a canal. And keep walking. Find another crowd? Go the other way. Keep walking until you find those quiet back-streets of Venice, where Venetians live and work and shop. It won’t take long, I swear. It’s just that most people don’t bother to give it a try.
Oh, and put down the map for now. Maps in Venice are almost entirely useless, and you can’t get too lost, anyway. You’re on an island, after all, and you can always ask someone to direct you back to St. Mark’s Square or the Rialto or something major and find your way from there.
Later in the evening of your first day in Venice, swing by the Rialto Bridge – it’ll still be kind of crowded, but it’s sometimes less busy at night when the day-trippers have left. And this is a great time to take that leisurely “cruise” along the Grand Canal on the #1 slow vaporetto water bus that I listed as one of my 20 things everyone should do in Italy.
If you found St. Mark’s Square unbearably busy earlier in the day, walk back through one last time late at night – and I mean late, if you can keep your eyes open, like on your way back to your hotel from dinner. Venice isn’t a nightlife town, so when restaurants close up it can get eerily quiet. Walk through those weird back-streets you found earlier. Walk to the edge of the islands and look out over the blackness of the Venetian lagoon. Listen to the water lapping against the edge of this city that shouldn’t exist, and whisper thanks that it does.
And sleep well.

You’ll get up early on your second day in Venice, partly because you want to soak in the city as it’s waking up and getting ready for the day-trippers and partly because you’re still jetlagged. Whatever, go with it – it’ll work to your benefit in Venice.
If you’re out and about early enough, you may get treated to the city’s custodians sweeping up yesterday’s detritus in St. Mark’s Square, or Venetians doing their morning shopping near the Rialto Bridge at the city’s market (some of which is on boats). Yes, this is a real city where real people live, although the number of Venetians in Venice declines dramatically every year.
The way I see it, you’ll have two main options for how to spend your second day in Venice. If there are other sights (like the Guggenheim Museum or the Accademia) you want to see but missed on your first day’s wanderings, or if you loved your wandering so much that you felt like the sun set too soon, then by all means spend your second day much like your first. Since it’s easily the best way to spend time in Venice, there’s nothing wrong with just strolling aimlessly for two days. 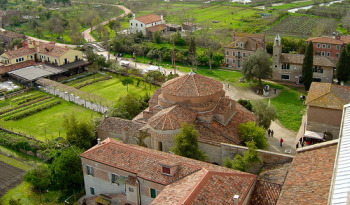 If, on the other hand, you’re feeling restless and want to see something else, you can spend a good part of the day on an excursion visiting the three major islands in the Venetian lagoon. Murano is famous for glass-making, Burano is famous for lace-making (and it’s brightly-painted houses), and the remote Torcello is where the city of Venice got its start.
Murano is the most popular of the three, so you won’t really be escaping the crowds there – and you might be sucked into a half-hearted glass-blowing demonstration that spits you out in an overpriced gift shop (it’s not all bad, but be wary of people luring you into free demonstrations). Burano is a little less crowded, and its multi-colored houses can’t be beat for almost dollhouse-like cuteness. Torcello (pictured at the right) is my favorite of the three, mainly for its seclusion and the stunning mosaics in its old cathedral.
Whatever time is left after your lagoon excursions can easily be taken up with more wandering – especially since you’re probably going to get lost a few times on your way to one place or another.
If you’ve got a working mobile phone in Italy and you like scavenger hunts, you might want to give the whaiwhai game in Venice a try – this could be especially fun for a group to play to give your wandering a little bit of structure.
Then at some point later on your second day in Venice, you’ll get on a train and wave goodbye to the crazy canal-filled city. And if you’ve done it right, you’ll already be trying to figure out when you can return.
>> And if you’re following my recommended route, your next stop is the Cinque Terre for two days – so here’s how to get from Venice to the Cinque Terre. Hint – the train is your best option, and by booking tickets in advance using the box below you’ll get the best rates Trenitalia has to offer.

These articles are full of more tips you’ll need for your stay in Venice, no matter how long you’re there. 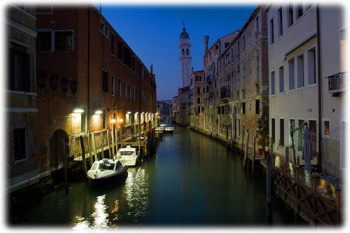