When is Italy not in Italy? When it's in Switzerland. 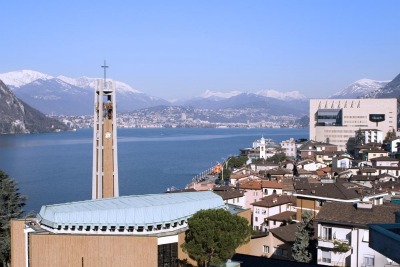 The Italians were never very good at colonization. One practical outcome of this fact is how few places on earth have had Italian among their “official” languages. Outside the borders of modern-day Italy, Switzerland is the only other major country with Italian on its list of official languages – which makes sense in a way, given that the two countries share a border.
Sure, it’s common knowledge that part of Switzerland speaks Italian. But did you know that there’s a tiny part of Italy that’s totally within the borders of Switzerland?
Take out a map of northern Italy and you’ll notice the border between Italy and Switzerland goes up and down like a particularly volatile stock chart. One of the downturns in the border falls between two of Italy’s most popular lakes – Maggiore and Como. The small lake between those two, Lake Lugano, is part of Switzerland – and near the middle of that lake is a town called Campione d’Italia.
The small town of Campione d’Italia is what’s known as an “exclave,” in that it’s part of a county it’s not physically attached to. Practically speaking, however, people going from Switzerland into Campione d’Italia are unlikely to notice they’ve crossed any kind of border. The language doesn’t change, there’s no border guard, and the town is on the Swiss franc rather than the euro (although the euro is fairly widely accepted). The local phones are on the Swiss country code and even the local license plates are Swiss. You’d know the difference if you lived in Campione d’Italia, however – you’d be eligible for Swiss healthcare despite the fact that your (greatly reduced) taxes would go to the Italian rather than the Swiss government. 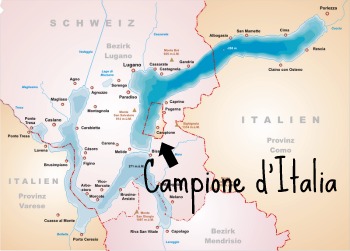 In addition to tourism, the biggest contributor to the economy of Campione d’Italia is its casino – the Casinò di Campione. The casino dates back to the early 1900s, and is the property of Italy’s government. It’s because of the casino that the residents of Campione d’Italia can enjoy a mostly tax-free life, since there’s enough money coming in through gambling to pay for the town’s facilities. The town is also known as a “tax haven,” since it’s exempt from the usual European Union VAT.
Getting to Campione d’Italia
As the crow flies, the shortest distance between Campione d’Italia and the Italian border is a scant one kilometer, but the mountainous terrain means the trip is closer to 15km to get to the nearest town in Italy. The closest airports to Campione d’Italia are those around Milan – Malpensa (MXP), Linate (LIN), and Bergamo’s Orio al Serio (BGY). If you’d rather skip the necessary border crossing between Italy and Switzerland en route to Campione d’Italia, however, then look for flights to Zurich (ZRH) and plan for a bit of a road trip.
>> Look for cheap flights to Milan or cheap flights to Zurich
Search for flights to Malpensa, Linate, Bergamo, and Zurich quickly and easily here: