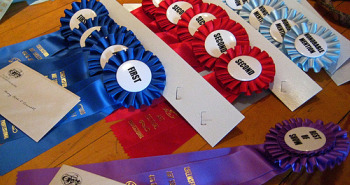 The 2009 Condé Nast Traveler Readers’ Choice Awards has come out, and – as in years past – Italy is featured pretty prominently in several relevant categories. I’ve gone through the various categories and pulled out the Italy-related results here – because, really, do we care about anything other than Italy?
(Well, yes. Kind of. But that’s beside the point.)
In truth, we probably don’t need lists like this to tell us that Italy is one of the world’s top vacation destinations, or that there are top-notch hotels and resorts to be found there. But it’s still kind of nice to be reminded of just how great Italy is.
Here are the Italy-related results of this year’s readers’ poll.

There are a total of four Italian cities among the top nine on the list of “top European cities” – and three of them claim the top three spots. Florence comes in at number one with a score of 84.6 (all scores out of 100). Rome is #2 with a score of 82.4, and Venice is #3 with a score of 81.1. Siena rounds out the top nine with a score of 78.8.
And don’t ask me why there are only nine on the list – I have no idea. In some regions, there are more – in others, there are less. It’s a mystery to me.
But to anyone who’s ever visited any of the four Italian cities that made the list, it’s not a mystery why they rank so highly. The criteria on which cities were judged for this year’s awards included atmosphere, friendliness, restaurants, shopping, accommodation, and culture. I suspect that Italy’s cities could probably score quite highly on just culture, restaurants, and shopping alone.

Italy is all over the list of the top hotels in Europe (althoug this list is broken down so that it’s the top hotels in Southern Europe more specifically). The #1 hotel on the list is Il San Pietro di Positano in Positano, and #2 is Il Pellicano in Porto Ercole. Another Positano property comes in at #6 (Le Sirenuse), the Four Seasons Hotel Firenze in Florence is tied for #7, and the Four Seasons Hotel Milano in Milan is #11.
The list is 99 hotels long, and there are hotels in Italy sprinkled throughout, all the way down to the bottom. I didn’t count, but according to the blurb at the top of the page Italy has 46 hotels featured on the list, more than any other in its category.
Hotels were judged on dining, location, overall design, rooms, and service.

I’m not completely sure how or why they separate out “small hotels” from “hotels,” but they do – and there are several Italian hotels featured on this list, too.
The top small hotel on the list is La Scalinatella on the island of Capri. #3 is the Grand Hotel a Villa Feltrinelli on Lake Garda, #4 is the Palazzo Sasso in Ravello, tied for #7 is the Villa San Michele in Fiesole, #17 is the Hotel Villa Cipriani in Asolo, and #35 is the Hotel Lungarno in Florence.

On the list of the top European resorts, which features 25 resorts in total, Italy appears four times – tied for #4 is the Villa d’Este in Cernobbio on Lake Como, #16 is the Relais Borgo San Felice near Siena in Tuscany, #17 is the JW Marriott Capri Tiberio Palace Resort & Spa on Capri, and #20 is the Hotel Cala di Volpe on Sardinia’s Costa Smerelda.
Resorts were judged on activities, dining, location, overall design, rooms, and service.

Italy again appears frequently on the list of the top European islands – Capri is #3, Sicily #5, and Sardinia #9. And this is with some pretty tough competition from countries like Greece, Spain and Croatia.
Islands were judged on activities, atmosphere, beaches, friendliness, accommodation, restaurants, and scenery.

Each time Condé Nast Traveler puts together this list, they also highlight all the things that get near-perfect scores. Two years ago, a hotel in Capri actually got a perfect score of 100, but this year the highest score on the list went to an Asian resort (it got 98.9). Italy isn’t left off the near-perfect list, however, and that Capri hotel is still featured – it’s just not coming in with a perfect 100 anymore.
La Scalinatella is the Capri hotel that once topped the top 100 list, but it’s now Italy’s top entry – it’s tied for #4 with a score of 97.8. Positano’s Il San Pietro di Positano hotel is at #11 with a score of 97, and the Grand Hotel a Villa Feltrinelli on Lake Garda and Il Pellicano hotel in Porto Ercole tie for #19 with a score of 96.1.
photo by Muffet