Jersey Shorizato: Do Italians even care about Jersey Shore?

Earlier this week, I offered up my Italy travel tips to the cast of the Jersey Shore – but since I don’t live in Italy, I thought it would be interesting to include the perspective of someone who has lived in The Boot for awhile. I called on my friend Erica Firpo, American expat in Rome and author of multiple guidebooks to the Eternal City, to address the question of how the Jersey Shore gang might fit in in Italy, and whether the Italians will even care that they’re in the country.
Oh, and be sure to hit “play” on the playlist at the bottom of the post before you start reading – Erica chose a song she thinks fits the mood perfectly. 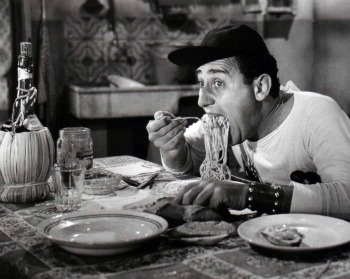 In just a few months, “eight of the hottest, tannest, craziest Guidos” will hit the beaches of Italy as MTV deports fan-crazy Jersey Shore to the old country. And yes, while there are nay-sayers to PLB (palestra, lampada, bucati, or gym, tan, laundry) – Wall Street Journal reports that Beppe Severgnini, prominent Italian/American culture commentator, said “that’s the last thing we need,” – the rest of the country seems at most slightly curious as to where the cast will be filming. Even the darkest of Jersey tans fades next to Bunga Bunga.
Newspaper articles, magazines and blogs can’t stop guessing locations for Jersey Shore Italia. Il Secolo XIX writes that the Italian Riviera should be in pole position to host the MTV show with Cinque Terre, Portofino and Santa Margherita beach communities as ideal setting for the adventures in tanning, in addition to the fact that the area is already a favorite amongst American tourists. Rome‘s popular beach Ostia has been hailed as a Jersey Shore parallel, with two mini divas whose charm rivals that of Snooki and JWoww.
The reality of the reality show is that Italy has a crop of beaches, such as Sicily’s Taormina and Cefalu (Vinny’s family is from Sicily), Sardegna‘s Costa Smeralda, Tuscany‘s Viareggio, Campania‘s Ischia and Emilia Romagna‘s Rimini, all of which are perfect to host the Jersey crew whether for their discoteche and unabashed fashion or their cinematic good looks.
But let’s get to the main issues of a Jersey Shore all’italiano: will the guidos and guidettes be G-T-Lost in translation? Probably. Remember this is a group who is constantly criticized for their English language skills. I eagerly await their version of Italian.
Will they mistakenly flaunt bad taste in a country where bella figura gives you street cred? Definitely. But it must be noted that confidence is key in Italy, no matter how you dress.
Finally, will they jersey shorizato Italian culture, shocking their ancestors, relatives and neighbors with unexpected bad behavior and a not-so-pleasant Ital-American stereotype? I have but one word: Supercafone.

Italian 101: tamarro, coatto, tascio, fustaccio, supercafone – the unintentionally goofy, tanned, pumped up (kind of), pimped out boys (and girls) of dance floors, beaches and backyards. Or in Jersey Shore speak: guidos from another mother.

Never forget Italians have a great sense of humor and have made an art form out of laughing at them selves. Think Alberto Sordi in Un Americano a Roma, Roberto Begnini in Night on Earth, and the more recent but lesser-known The Arcore’s Nights, a Berlusconi parody/ “Summer Lovin'” remix in a quaint Ital-grish. If anything, Italy loves to love the supercafone.
See also what the editor-in-chief of Vogue Italia, Franca Sozzani, thinks about the Jersey Shore coming to Italy. 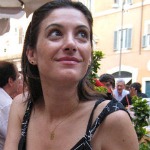 About the Author:
Erica Firpo has lived in Rome for roughly a decade and has authored or co-authored several guidebooks for the city – including books for Fodor’s, National Geographic Personal Explorer, and Luxe City Guides, as well as her self-published book Rome Little Black Book. Her newest book is Rome Select, published by Insight Guides. Erica’s personal blog is Moscerina, and she’s on Twitter as @moscerina and NileGuide’s Rome expert as @NG_Rome.
top photo: still of Alberto Sordi from “Un Americano a Roma;” author photo provided by Erica Firpo