Getting from the Cinque Terre to Florence (and Vice Versa) 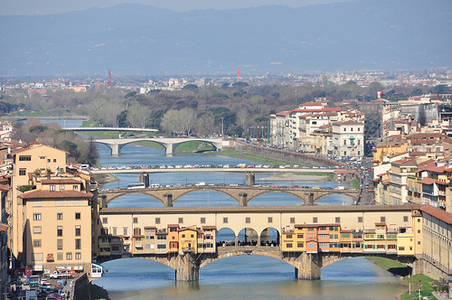 You’ve just spent a lovely few days (or more, if you’re lucky) taking in the Ligurian coastline’s favorite cluster of tiny villages, the Cinque Terre, and you’re heading back inland to continue on your Italian adventure. You’re headed to the cradle of the Renaissance, Florence.
Perhaps you thought you’d have to skip that quintessential Italy vacation photo-op in Pisa, the one where you’re standing with your hands held up so that it looks like you’re propping the leaning tower of Pisa from falling over, but you’re in luck. The best way to get from the Cinque Terre to Florence often includes a stop in Pisa – so you can get your photo and be back on the train in an hour or two.
Even if you’re not following my perfect 2-week Italy itinerary, linking the Cinque Terre and Florence isn’t that uncommon – in fact, some people do day-trips from Florence to the Cinque Terre. (I don’t necessarily recommend this, but it’s something people do.) If you’re doing that, you’ll just need to sort of reverse these directions.
And you might notice that there are only a couple of options listed below – taking the train or driving. Yes, there are buses in Italy, but they’re regional rather than national. And since the Cinque Terre is in one region (Liguria) and Florence another (Tuscany), connecting the two by bus is a bigger headache than anyone should inflict upon themselves. If you’re someone who loves buses more than anything in the world, the best way to get between these two places by bus is on a big-bus tour departing from Florence as a day-trip to the Cinque Terre.

Taking the Train from the Cinque Terre to Florence

ShowBookingWidget();
As is often the case in Italy, the best option for this route – getting from the Cinque Terre to Florence – is the train. All trips on this route require a change at some point, but in at least one case you can make that work for you – especially if you’re the “checking things off my Italy to-do list” type of traveler.
Depending on which of the five villages you’re in, you’ll either head for Monterosso (the northernmost and largest village) or you’ll go south to La Spezia, the largest city close to the Cinque Terre and just south of Riomaggiore. In most cases, going to La Spezia is your best option, as most trips from Monterosso-Florence indicate a change at La Spezia anyway. There are some trips which skip La Spezia and go from Monterosso straight to your other train change, so if that itinerary works with your schedule and you’re already staying in Monterosso then that’s the way to go. The clerks at the train station in Monterosso will be able to tell you which routes are available to you at what times.
Almost without exception, you’re going to need to change trains once between the Cinque Terre and Florence, even if you’re leaving from La Spezia. The cities where you can change trains varies depending on the time you’re leaving and the route you choose – options include Sarzana, Viareggio, and Pisa. So unless you’re making a beeline for Florence and don’t plan on seeing anything of the train-change city than the train station, I highly recommend you choose the itinerary that lets you spend an hour or two in Pisa. 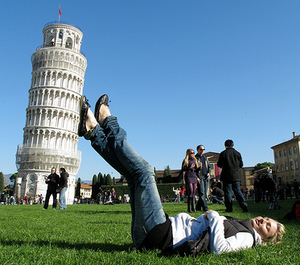 Because the trains that you’ll be taking from the Cinque Terre to Florence don’t require reservations, you’ll just have tickets for the journey (or a railpass), which don’t have specific train times associated with them. To make a 2-hour stop in Pisa, then, you don’t need to do anything but get off the train in Pisa, go into the city center to see the leaning tower, and then get on the next train from Pisa to Florence. It’s incredibly simple, and a very popular way to see Pisa. There are luggage lockers at the Pisa train station so you can stow your bags if you don’t want to cart them into the city center, and if the lockers are full there’s also a slightly more expensive luggage storage area that’s operated by a couple guards.
A train ticket from the Cinque Terre to Florence is going to vary in cost, depending on which of the five villages you start in and how many changes you have to make. A ticket in first class can range from €12-21, and in second class a ticket will range from €9-15. Some trains only have second class cars, too. The length of the journey itself is also going to vary, but you’re talking about roughly 2.5-3.5 hours of train time – not including time between trains at your transfer point, or any time you spend in your transfer city.
>> If you’re stopping in Pisa, be sure to check out booking tickets to the leaning tower of Pisa in advance so you can make the most of your time there.

Driving from the Cinque Terre to Florence 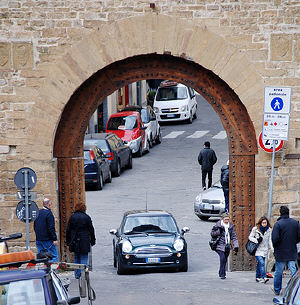 Driving in Italy isn’t for the faint of heart, and there are few places where that’s more true than on the roads of the Cinque Terre. The roads that wind along the coastline offer some stunning views, but they’re extremely narrow and winding, and they’re shared by cars, scooters, motorbikes, trucks, and gigantic tour buses alike. You’ll need to honk as you approach every turn to alert drivers coming in the opposite direction, and you’ll likely have to stop quickly and reverse now and then to allow a giant bus to get around a corner.
If this sounds like some kind of amusement park ride or video game and makes you look forward to driving in the Cinque Terre, may I recommend that you invest in whatever extra insurance the car rental company wants to sell you? (If this doesn’t sound like any fun at all, then stick with the train.)
I do recommend getting a good Italy driving map if you’re going to be hitting the road, but in general you’ll be heading for La Spezia via the Cinque Terre’s windy roads and then looking for the A12 Genova-Rosignano in the direction of Livorno. Around Viareggio, you’ll begin looking for signs for the A11-12 Firenze-Pisa Nord in the direction of Lucca (the A11 and A12 are the same road for awhile, which is why it’s got both numbers). After Lucca, begin looking for the signs to change to say A11 Firenze-Pisa in the direction of Firenze.

Now that you’re in Florence… 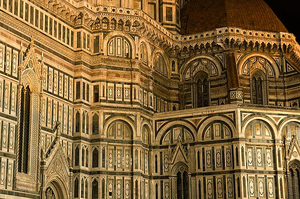 Here are some posts I’ve written which may be handy:

Here’s a quick video someone took driving along the Cinque Terre coastline: