What to Eat in Italy: 7 Personal Favorites

Scan through any guide to Italy and you’ll come across at least the polite suggestion (if not the outright command) that eating your way through the country is a good way to spend a vacation. Yes, Italian food is that good.
It’s nigh-unto-impossible to write one comprehensive non-book-sized list of what to eat in Italy, so here’s my list of the foods I think ought to be on a must-try list on for an Italian trip. Some of them are very regional, so if you aren’t traveling into the area where they’re made, you can always live by my number one rule when it comes to eating in Italy:

If it’s local and in season, you should eat it. Period.

Now, on with the food show. Here’s a list of seven suggestions for what to eat in Italy, plus the cities and/or regions where they’re from (and therefore, usually, best).

What to Eat in Italy 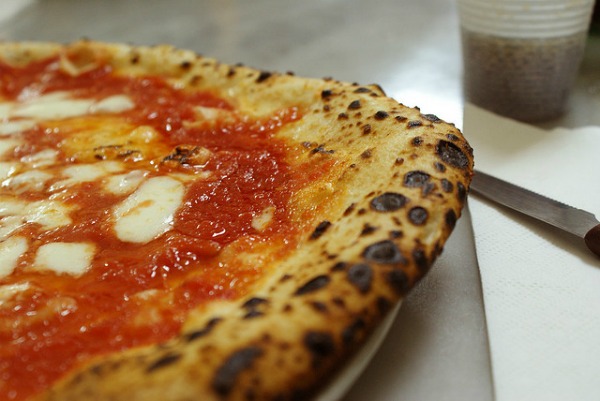 Perhaps the most famous Italian food export, pizza is easy to find pretty much anywhere you go in Italy. You can even have pizzas worth writing home about in cities from Venice to Palermo, or anywhere in between. But for the queen of all pizzas, you’ve got to go to Naples.
Naples is where pizza comes from, and the city takes its signature dish seriously. All over the city (and the Campania region) you’ll see pizzerie proudly displaying their “vera pizza napoletana” signs to let you know that they’ve gotten the regional pizza consortium’s stamp of approval.
Yes, there’s a regional pizza consortium. I told you they took pizza seriously in Naples.
Traditional Neapolitan pizza is meant to be a single serving, arrives at your table in one piece, and is meant to be eaten with a knife and fork. Opinions vary on whether it’s acceptable to eat the whole middle and leave the crust (you can order a small pizza, a “mignon,” if you’re really not that hungry), and in some parts of Italy you’ll see people manually cut triangular pizza “slices” to pick up (folded in half lengthwise) and eat – but for the most part pizza in Naples is eaten in its entirety and without touching the pizza with your hands. One reason for this hands-off approach is that Neapolitan pizza tends to be a bit more “wet,” especially in the middle, as the best mozzarella contains more water than the shredded (and dry) stuff most of us are used to.
You’ll find regional variations on pizza in other parts of Italy, but for a traditional pizza experience I suggest you make a beeline for Naples.
>> Read more about the best pizza places in Naples 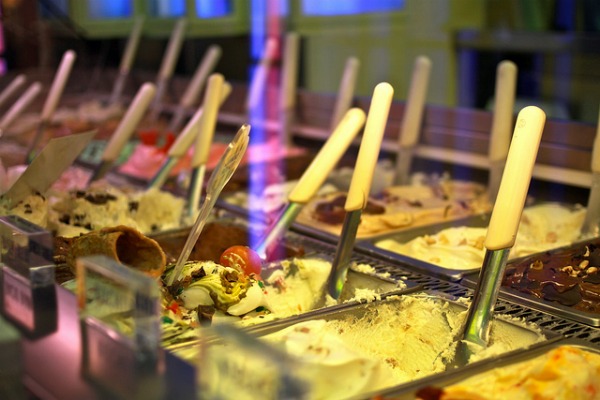 I think I look forward to eating gelato twice a day when I’m in Italy more than any other aspect of my travels through the country. It feels like the quintessential holiday indulgence – eating ice cream twice a day! – but it’s far less sinful than some other indulgences one could mention…
Ahem.
Eating frozen treats in Italy dates back to Roman times, and it’s a bit difficult to pinpoint exactly where or when gelato in its current form was “invented,” but one story is that gelato as we know it today was first created in Florence in the mid-16th century. It’s no surprise, then, that Florence is one of the cities in which gelato regularly generates raves.
The truth is, though, you can have rave-worthy gelato in many places throughout Italy. My favorite gelato, the one I dream about, is one particular flavor at a tiny neighborhood gelateria in Milan. I’ve had gelato so good it was other-worldly in Turin, Amalfi, and Manarola. In Sicily, they serve gelato inside a brioche roll. The main thing is to know how to spot good gelato, and to not be afraid of tossing a little cup if it’s not up to snuff. It’s only a couple euro, after all, and there’s no point in wasting precious stomach space (not to mention calories) on gelato that doesn’t make you swoon.
>> Read more about how to find good gelato in Italy 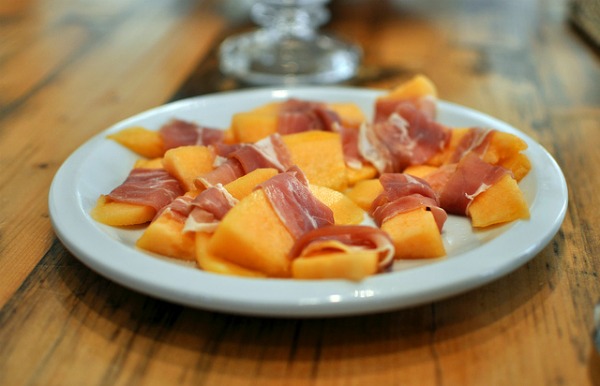 Vegetarians excepted, pork products in several forms are likely on your must-eat list for Italy. Prosciutto is the most famous of these, and I swear it does taste better when you eat it close to its source in the Emilia-Romagna region, but there are so many porky variations available in Italy that you’re encouraged to try and compare as many as you like.
You’re likely to find prosciutto on Italian menus from the tip to the toe, but – as mentioned – it comes mainly from the Emilia-Romagna region, and particularly the area around Parma. While prosciutto isn’t really a seasonal dish, there is an annual Prosciutto Festival in and around Parma that takes place usually in September. During the festival, prosciutto makers open their doors and give guided tours of the facilities – even if they’re in Italian only, they’re pretty fascinating.
For my part, my favorite time to eat prosciutto is the summer, because my favorite way to eat prosciutto is in prosciutto e melone. This dish is an appetizer, and consists of thin slices of prosciutto wrapped around wedges of fresh melon (usually a cantaloupe-type variety). I could eat prosciutto e melone by the truckload, and I don’t even like cantaloupe!
Other pork products you’ll see on menus and in recipes throughout Italy include mortadella, pancetta, culatello, cotechino, porchetta, and guanciale.
>> Read more about going to a prosciutto festival in Italy 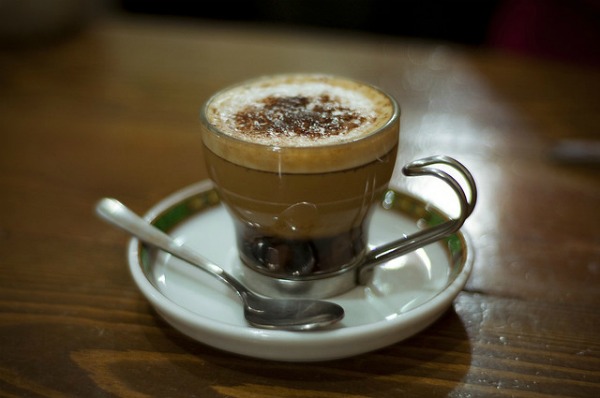 Having a tiny cup of espresso in the morning, standing at the bar on the way from your apartment to the office, is so very Italian that the idea of not joining in on that fun isn’t acceptable – even if you’re on vacation, don’t have an office to go to, or an apartment to come from. You still need breakfast, right?
In this section, I won’t get so specific as to tell you which Italian coffee drink to order. That’s a personal decision, and the variety of coffee drinks in Italy is such that to suggest just one is far too limiting. More important than the drink you choose, however, is the experience itself.
Have your coffee shot at the bar like the Italians do. It’s a tiny cup, so you’re only standing there for a few minutes at the most anyway. Grab a cornetto pastry to have with your coffee – again, like the Italians – and that’s your breakfast. It’s quick and cheap, and this not-enormous breakfast means that you’ve got permission to stop mid-morning for a snack and – yes – another coffee.
This is, after all, what the Italians will be doing.
When I’m in Milan, my go-to coffee drink is one I can’t find outside Italy (indeed, it’s not exactly common outside Milan) called a marocchino, but there are countless variations on the simple caffè – there are even some non-coffee options for those of you who want to partake in the experience without the actual coffee.
>> Read more about the different kinds of coffee drinks in Italy 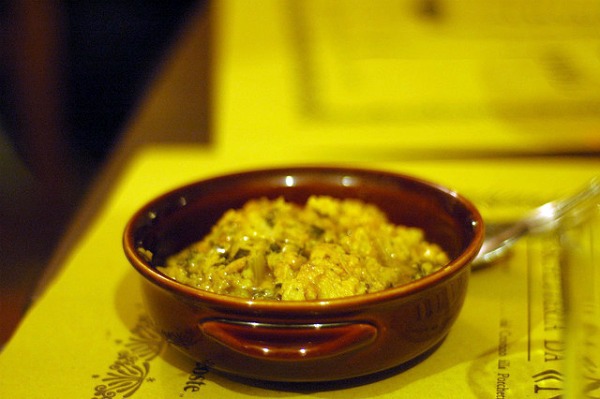 This dish is not only regional (it’s from Tuscany), it’s seasonal. Sure, you’ll find ribollita on the menu in many Tuscan cities (especially the more popular ones) year-round, but to Tuscans it’s a winter dish. When you hear more about what it is, you’ll understand why.
The word “ribollita” simply means “re-boiled” – and ribollita is a bread-and-vegetable soup that’s heated once in order to cook it and then heated again the next day (or later) in order to eat it. That second cooking is where the dish gets its name. There are variations on what vegetables go into a ribollita, but it wouldn’t be considered very traditional if it didn’t include day-old bread, cannellini beans, and a Tuscan type of kale called cavolo nero.
Ribollita falls into the category of “cucina povera,” loosely translated as “peasant cooking,” and its inexpensive (yet filling) ingredients make it easy to see why. It’s a fabulous dish for using up stale bread, and with the vegetables, spices, and excellent local olive oil that’s added it’s way more flavorful than you think it will be.
This isn’t a dish to try in the summer when it’s hot out, but if you’re visiting Tuscany and there’s a chill in the air, it’s the ideal way to warm up from the inside out. You’ll never look at stale bread the same way again.
>> Read about another hearty Italian soup in this lentil soup recipe from Umbria 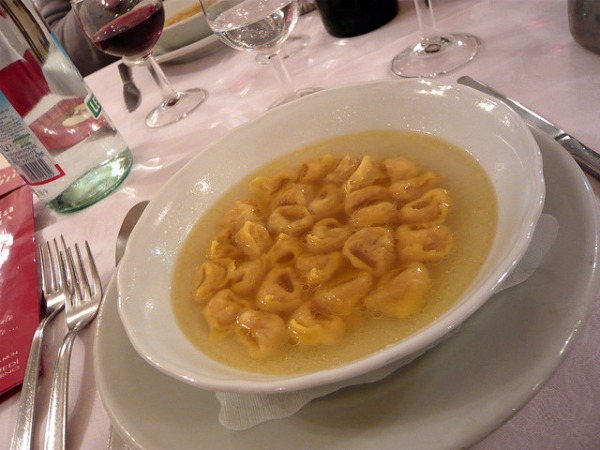 The pasta names on a menu in Italy are likely to be among the most familiar to non-Italian speakers, because they’re the same names we use in English – spaghetti, tagliatelle, farfalle, etc. While tortellini may be a familiar pasta name and shape, however, the way it’s served in the Emilia-Romagna region might be surprising.
The traditional way to serve tortellini in the region that gave birth to these little pasta pockets is in a broth, or “brodo” – hence the name tortellini in brodo. The broth is made either of chicken or beef, and there’s often nothing in the broth but a handful of little tortellini. In the Italian style of multi-course meals, tortellini in brodo is the pasta course – it would be followed up by a main course of meat or seafood – so it isn’t meant to be a heaping pile of pasta.
With so many pasta shapes out there, it may seem odd to focus on just this one pasta dish – and it’s true that you’d be smart to find out if there’s a local pasta specialty (or specialties) wherever you are in the country and order that. I’m highlighting tortellini in brodo in particular here because it was definitely a new way to eat pasta when I first had it, and it became a fast favorite. The light (but flavorful) broth allows the flavor of the pasta filling to come through, which is important, given that there’s such a small amount of filling in each bite.
The fact that there’s a legend about how the shape of a tortellini is meant to mimic the shape of Venus’ navel is just an added bonus, methinks.
>> Read more about all the different pasta shapes in Italy 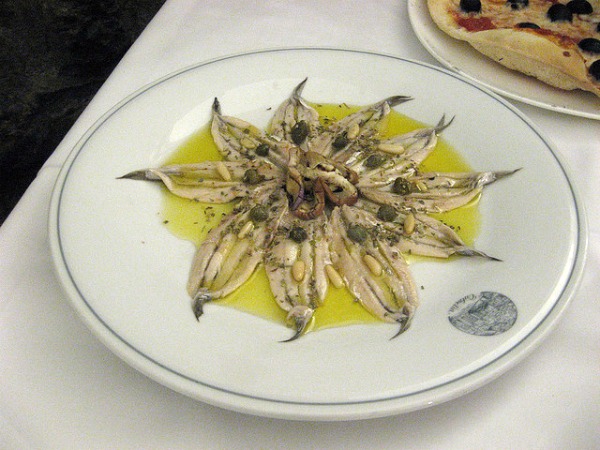 Everything else on this list is either something most people already love or that sounds innocuous enough that even not-very-adventurous eaters are willing to try it. Anchovies, on the other hand, have a bit of a reputation to overcome.
I happen to like it when a briny, cured anchovy is melted into the dressing of a caesar salad, but I never would have dreamed of eating anchovies on their own – or *gasp* putting them in pasta sauce – before I went to Liguria. Now, I crave them between trips.
We’ve all heard that the popular Cinque Terre used to be a bunch of sleepy fishing villages, but you may not have heard that one of the main fish they’re pulling out of those waters (to this day) is the anchovy.
Up and down the Ligurian coast, anchovies are on the menu, and they’re nothing like the cured and canned version you’re probably accustomed to. These are fresh anchovies, often served as an appetizer with a bit of lemon and olive oil, and they’re incredible. In some cases, they’re small enough to be cooked and served whole – heads and all – but if you’re not comfortable eating the heads you can cut those off easily enough.
You may not dream of anchovies (acciughe in Italian, pronounced ah|CHOO|geh) the same way I do after your visit, but you’ll at least have expanded your horizons of what that tiny fish can become.
>> Read more things you didn’t know about the Cinque Terre
photos, top to bottom, by: keepwaddling1, brianandjaclyn, CarlYoungdale, 3oheme, tuscanycious, WordRidden, dblackadder