Getting from Milan to Rome (and Vice Versa) 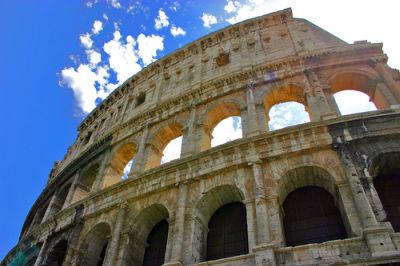 Rome and Milan might seem like they’re very different, but they have a lot in common. They’re Italy’s biggest cities, the homes of the country’s primary international airports, and where you’ll find the headquarters for the vast majority of companies doing business in Italy. The number of Italians who regularly zip back and forth from Milan to Rome and Rome to Milan, then, is high. And thanks to the new high-speed rail line connecting the two cities, the trip is even faster than it used to be. But it’s not just commuters who need to get from Milan to Rome (or vice versa) – tourists often need to make that trek, too.
You have several options for getting from Milan to Rome, and the ideal transportation solution for you will be determined by a combination of things – your travel budget, the amount of time you have to spend on vacation, and the kind of travel you prefer. Personally, I always lean toward taking the train (especially the new high-speed variety), but I know not everyone travels like I do. In the interest of covering my bases, then, here are your options for how to get from Milan to Rome.
(Oh, and if you’re looking for how to get from Rome to Milan, the basics will be identical – station names, ticket prices, drive times, etc.)

Taking the Train from Milan to Rome

ShowBookingWidget();
Whereas the trip from Milan to Rome by train in Italy used to take upwards of 5-6 hours, the introduction of the new Frecciarossa (red arrow) train has cut that trip time almost in half. You can now get to Rome from Milan in 3.5 hours, making it almost reasonable for a day trip. I said almost.
Still, even if it’s not quite in hop/skip/jump territory, the new high-speed train does make getting from Milan to Rome (or Rome to Milan) so much faster that it’s not bad news if the lowest prices you can find on airfare are cheap flights to Milan instead of your intended target of Rome. You can book the best deal and take the train down to Rome (provided the cost of a train ticket doesn’t outweigh the savings on your airfare!).
The fastest trains leave Milan’s Centrale station once per hour throughout most of the day, arriving at Rome’s main station, Termini. There are a couple of stops en route (Bologna and Florence) but you don’t have to get out or change trains or do anything until you reach Rome. First class tickets on the Frecciarossa from Milan to Rome cost about €115, and second class tickets cost about €90.
Slower trains from Milan to Rome still exist, and can take 6 hours or more to get from one city to the other. Tickets on these slower trains aren’t super cheap, either – first class tickets can cost €60 and second class tickets can cost €45 – so you’ll want to consider whether the money you’re saving is worth the extra time in transit.
In any case, some of the trains from Milan to Rome will require reservations in addition to your ticket – the Frecciarossa always requires reservations, for example – so it’s important to ask about that when you’re buying your ticket at the counter. And if you already have an Italy rail pass, that acts as your ticket and you’ll just need to buy a reservation for a particular train.
>> Learn more about taking the train from Milan to Rome

Flying from Milan to Rome 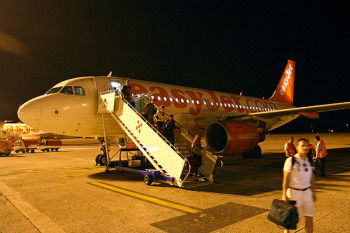 As mentioned, Milan and Rome are home to Italy’s two biggest international airports – Malpensa Airport in Milan and Fiumicino Airport in Rome. Which means that if you happen to find a great deal on airfare to Milan but you’d really rather be in Rome (or vice versa), one solution is to not leave the airport at all and just hop on a short flight from one airport to the other as soon as you arrive. Flying from city to city in Italy isn’t always the best idea in my opinion, but in this case it can be.
The flight from Milan to Rome usually takes between 1-1.5 hours depending on which airports you’re using and which carrier you’re flying. There’s an easyJet flight from Malpensa in Milan to Fiumicino in Rome that takes about 1 hour and 15 minutes, and tickets can cost as little as €25-30 one way. Alitalia’s flight from Malpensa to Fiumicino can be a little as €50-60 one way.
Quick search for cheap flights to Rome:

Ryanair flies from Orio al Serio airport – which is technically in Bergamo, not Milan – into Rome’s smaller Ciampino airport, and sometimes offers flights for €20-25 one way. Air One flies from Milan’s smaller Linate Airport (which is closer to central Milan) into Fiumicino in Rome, although the routing seems to include an inexplicable trip to Palermo before heading north to Rome, and tickets aren’t as cheap (€100+ one way). In other words, if you’re flying into Linate and looking for the best way to get to Rome, my advice is to take the train – or make your way to Malpensa if you want to fly.
>> More information on budget airlines that fly to Milan, and budget airlines that fly to Rome

Driving from Milan to Rome 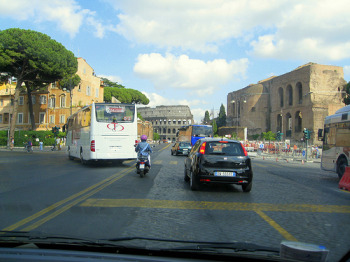 I’m a big believer in taking public transportation whenever possible in Italy, partly because I’d rather not match wits with Italian drivers and also because I’ve seen the road rage caused by trying to find a parking spot in big Italian cities. But if I can’t talk you out of renting a car to drive from Milan to Rome (or from Rome to Milan), then here’s what you need to know about the drive.
I always use the Via Michelin site when I’m looking for driving information in Europe, and just plugging in general directions from Milan to Rome the “Michelin recommended” route is one that’ll take almost 6 hours of drive time (assuming, of course, that you don’t run into traffic) and cover more than 580km. The Michelin site estimates that you’ll spend more than €85 on the trip – more than €30 in road tolls alone – and suggests a route which takes you southeast to Bologna before cutting south to Florence and then down to Rome (which is more or less the same route the high-speed train takes).
Your best bet is to use the Via Michelin site to type in specific addresses from which you’re departing and where you’ll be arriving so you get the most accurate directions possible – and I’d also highly recommend that you have a good driving map of Italy as well as someone to navigate (or a GPS unit in the car).
>> More information on renting a car in Italy, and tips for driving in Italy

Taking the Bus from Milan to Rome 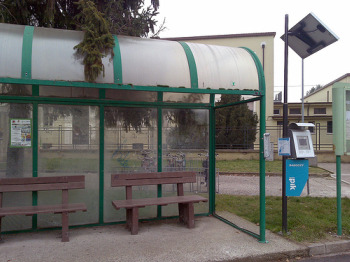 It’s natural to assume that taking the bus from one city to another in Italy would be the cheapest transport option, and therefore it would be most appealing to travelers on a seriously tight budget. And where there are bus routes connecting cities on your itinerary, they often are really cheap. The problem is that Italy’s buses aren’t tied together in a national network, making journeys between regions often quite difficult. There is one bus company I know of, however, that connects Milan and Rome.
The SENA bus company has three stops in Rome and four in Milan, so you’ll want to plug addresses into a map to see which ones are closest to where you are in Milan and where you’re going in Rome. It’s worth noting that the Tiburtina bus stop in Rome is connected to Roma Termini via the Rome Metro. The journey from Milan to Rome is an 8+ hour trip, but ticket prices start at just €16 so it’s a great deal for budget travelers.
Also keep in mind there’s the Eurolines network of coach services that connects big cities throughout Europe if you’re traveling from one country to another.

And now that you’re in Rome… 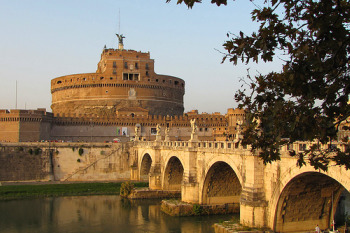 Welcome to the Italian capital! To get you pointed in the right direction in The Eternal City, here are some links to get you started with trip planning: