Getting from Rome to Florence (and Vice Versa) 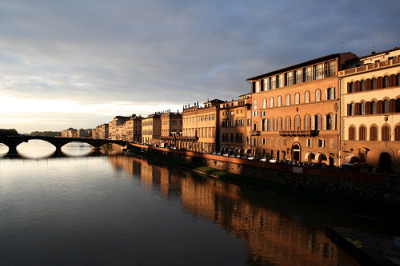 As it happens, there are lots of people out there hunting for information about how to get from Rome to Florence or vice versa. And it’s not just because that trip is included on my perfect 2-week Italy itinerary, either (although that would be flattering). No, it’s that these two cities are incredibly common stops on any trip to Italy, especially a first-time visit, and so naturally people are looking for the best way to get from Point A to Point B.
Whether you’ve been to Italy before or not, if you’ve read any of the transportation-related articles on this site you’ll probably know which method of transport I’m going to recommend even before you finish reading. (And I’ll even make it easy by giving you a big hint.)
But let’s go over all your options so you can make an educated choice, shall we?

Taking the Train from Rome to Florence

ShowBookingWidget();
Okay, if you hadn’t already guessed or clicked on the “hint” link above, I’ll answer your burning question now. What’s the best way to get from Rome to Florence (or, for that matter, from Florence to Rome)? It’s the train. I may sound like a broken record a lot of the time on this site, saying the train is often your best bet, and I’m admittedly a huge fan of traveling by train so may be a little biased. But in this situation, the train really is the best option. You’ll see why when you read the other options below.
But let’s look at the information you’ll need to know about taking the train between Rome and Florence. 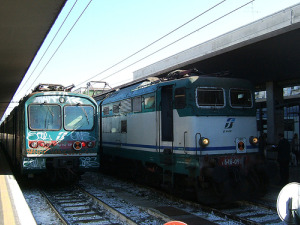 Trains leave Rome’s Termini Station bound for Florence’s Santa Maria Novella Station roughly every hour until 10-11pm, and the trip itself can range from as little as 1 hour 31 minutes to 2.5 hours (some are even as slow as 4 hours, for the really cheap trains). Especially with the super-fast new AV trains, the trip is incredibly quick – but of course the faster the train, the more expensive the ticket. And with the faster trains you typically need to buy a reservation in addition to your ticket. So if you’re on a stricter budget, you might want to look at the slower trains.
A ticket on a high-speed train from Rome to Florence can cost more than €105 for first class and more than €76 for second class. Buying in advance means you can get first class tickets for under €70 and second class tickets for under €50, however, so it’s well worth checking the fares ahead of time using the search box to the right.
The roughly 3-hour trip tickets are €36 for first class and just over €24 for second class. And that nearly-4-hour trip can cost as little as €16 for a second class seat (€25 for first class). The slow trains don’t usually require (or even have) reserved seating, so the ticket prices are lower overall, too.
Remember if you already have a rail pass that serves as your ticket – so you’ll just need to buy a reservation to supplement what you already have.
>> Learn more about taking the train from Rome to Florence, or vice versa – taking the train from Florence to Rome

Taking the Bus from Rome to Florence 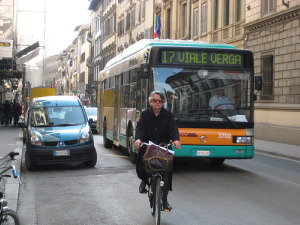 Riding the bus around Rome itself is highly recommended. Even taking the bus from one city to another in the same region can be a good idea – especially considering that more remote cities and towns may not have train service. But because Italy lacks a nationalized bus system, getting from one region of the country to another by bus is challenging at best.
Rome is in the Lazio region, and Florence is in Tuscany – and both regions run their own regional bus routes, with almost no overlap. There’s one company I’ve found that does cross the border between Lazio and Tuscany, but their buses run between Rome and Siena – not Florence. So if you’d like to stick to the bus, you’d have to take a SENA bus from Rome’s Tiburtina station to Siena (there are a few stops in Siena, including the city’s train station and bus station) and then take a bus from Siena to Florence. Tickets for the Rome-Siena bus start at just €19.50.

Driving from Rome to Florence 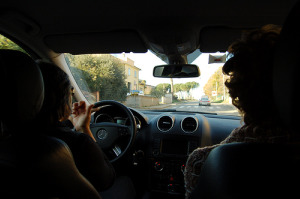 As mentioned, I like Italy’s trains. I even like Italy’s buses, trams, and subways. What I’m not at all interested in doing is driving in Italy. I know people who love the idea of the challenge of it, and that’s fine by me, but I still think if you’re smart you’ll avoid driving in Italy’s cities – especially Rome.
So, even if you’re excited about driving through the Tuscan countryside after your stay in Italy’s capital city, I highly recommend that you try to pick up your rental car outside Rome’s city center. If you’ve already been in Rome for a few days, heading back out to Fiumicino Airport just to get your rental car isn’t necessary, but when you’re looking for car rental offices see if you can find one that’s outside the ring road (Tangenziale) surrounding Rome, or at least further away from the historic center, so that when you pick it up you won’t have to drive through the warren of narrow streets before you get onto bigger roads headed north.
The trip from Rome to Florence is about 290km, and with no traffic or wrong turns or delays should take around 3-3.5 hours. The good news is that the bulk of the journey is on Italy’s lovely A1 motorway, which will (again, provided there are no traffic or construction delays) have you zipping north in no time. The bad news is that those lovely motorways come with tolls. Take the quickest route and you’ll be paying about €15 in tolls.
>> To figure out your route, I recommend the Via Michelin site for planning purposes and then having a good driving map in the car with you.

Flying from Rome to Florence 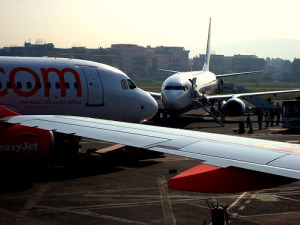 To begin with, when you’re contemplating your options for getting from place to place, you can easily rule out something if it’s a piece of infrastructure that’s just missing from one or the other destination. If, for instance, a city has a bus station but no train station, your decision just got simpler. But on the other hand, just because both places have their own airports doesn’t mean you shouldn’t rule out flying just the same.
Yes, Rome and Florence both have airports. Rome, in fact, has two. And Alitalia connects the two cities with one-hour non-stop flights that are sometimes as low as €61 one-way. But flying between Rome and Florence just doesn’t make sense for most people. The flight itself may only be an hour long, but add to that the time it takes to get to the airport, check in an hour before your flight, and then get from the other airport into the city. Compare that with the less-than-two-hour high-speed train ride and it’s easy to see the train is the better option.
Wanna look up the prices on flights anyway? Knock yourself out. 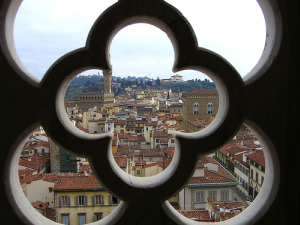 Florence is legendary as the birthplace of the Renaissance, and boasts a pleasant-to-walk-in city center as well as some of the country’s best gelato. All in all, it’s probably a good idea to see a museum or two while you’re in Florence (even if you’re not an art nut), but rest assured there’s way more to love about Florence than just its past. This heavily-touristed city is also popular with students, so it’s lively and very modern even though it’s an historic wonderland.