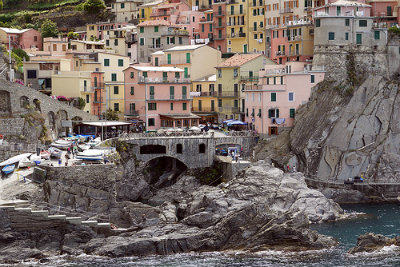 While Milan isn’t typically one of the must-see stops on an Italy itinerary (especially for first-time visitors), it is home to one of the main international airports in Italy. In other words, if the best deal you find on Italy flights is to fly into Milan, you’ll do that, even if your first order of business is to leave Milan.
For those of you making a beeline for the idyllic seaside villages of the Cinque Terre once you land in Milan, you’re in luck – the journey isn’t too far, all things considered, and going by rail means you won’t even have to change trains along the way. So, yes – I’d recommend taking the train, but I’ll present all your options so you can pick the one that’s right for your trip and budget.
A couple important notes:

Taking the Train from Milan to the Cinque Terre

ShowBookingWidget();
Italy’s high-speed train network connects the country’s biggest cities at the moment, and it’s continuing to grow, but chances are you’ll always need to take a slow train to get to the Cinque Terre. Trains from Milan-Monterosso (the northernmost and largest city of the Cinque Terre) leave Milan’s Centrale station throughout the day and take anywhere from just under three hours to just under four hours to make the journey.
Most don’t require changing trains along the way, but a few require not one but two changes. These are, not surprisingly, the trips that are closer to four hours long, so if you can avoid the trips that require train changes you’ll be saving yourself time as well as additional hassle.
Tickets for the train trip between Milan-Monterosso usually run between $30-45 for a normal fare (2nd class tickets are cheaper, around $32 at the time of this writing), but if you book a couple months in advance you can get “saver” fares with as much as 60% off the regular price – that’s as little as $13 (2nd class) on the trains with no changes required. Just put your travel information into the box above and look for the “Saver Fare” option. In some cases, it may be sold out already – and keep in mind that those cheap fares are only available a few months before the travel date.
>> Note that I’ve used Monterosso to represent getting to the Cinque Terre by train, but if you’ll be staying in another of the five villages, just type that village’s name into the box on this page – each village has a train station.

Driving from Milan to the Cinque Terre 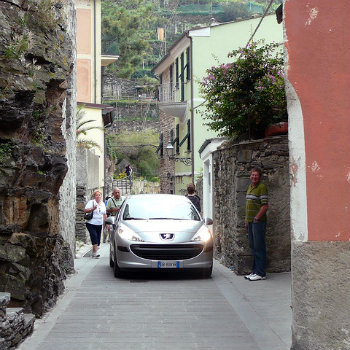 Driving once you’re in the Cinque Terre in order to get around between the villages isn’t recommended – parking is extremely limited and the train makes the trip much faster – but if you’re renting a car in Milan you can park it for the duration of your stay in the Cinque Terre before moving on to your next destination.
I like the ViaMichelin.com site for plotting out general driving routes in Italy. The site tells me that the 226km trip from Milan to Monterosso takes a bit less than three hours (two of which are spent on highways), and that it will cost about €15 in tolls. You can enter in more specific addresses than simply “Milan” and “Monterosso” to get more detailed driving directions, too.
Keep in mind that once you turn off the main highway and head for the coast and the Cinque Terre villages, the road gets more narrow, winding, and slow. What looks like a very short distance on a map can take you an inordinantly long time (I speak from experience here), so don’t put too much faith in the “this trip should take X hours” component of any trip planner. It’s also highly recommended to pick up a good driving map of Italy before you hop in the car. You can sometimes find these at travel bookstores outside Italy, but you should be able to find more detailed road maps of particular regions once you’re in the country.
>> Learn the rules of the road before you go: Driving in Italy

Taking the Bus from Milan to the Cinque Terre

So, let’s say you’re looking at a map of Italy, and you’re saying to yourself, “Milan doesn’t look so crazy-far from the Cinque Terre. I bet it would be really cheap to go by bus!” You’re right on the first count, and bus travel in Italy tends to be quite inexpensive, but it’s also (usually) much more complicated than you’d expect.
In short, there are buses that will get you from Milan as far as cities like Florence or Pisa, and from there you’ll need to take a train to get to the Cinque Terre. The bottom line is that you’re better off just hopping on a train in Milan to begin with – it will save you time and headaches in the end.
>> If you’re the kind of person who just LOVES TO SEE PLACES FROM A BUS, you can sign up for a Cinque Terre day trip from Milan – these organized tours use buses/coaches for transportation, and include a full day spent exploring the Cinque Terre. 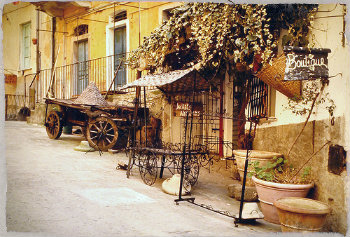 Need some help planning your Cinque Terre stay, now that you’ve successfully made your way here? These links should help: