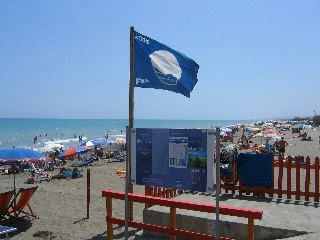 Summer’s coming to Italy, and with it a new report about which beaches are environmentally sound. Each year, the Foundation for Environmental Education comes out with a list of beaches and marinas in 38 countries around the world that meet their criteria of things like sustainable development, water quality, cleanliness, and safety. The FEE calls these “Blue Flag” beaches. Generally speaking, you know you’re doing well when the number of Blue Flag beaches in your country goes up each year – and with the list of 2009 Blue Flag beaches that just came out, I can proudly report that the number of Blue Flag beaches in Italy is up in 2009 from last year.
Yay for Italy! Yay for Italian beaches! Yay for you!
There are now 227 Blue Flag beaches in Italy in 2009, which is 12 more than 2008. 113 of these are considered “top-notch swimming beaches,” which is 9 more than last year. Overall, Italy ranks 5th in Europe when it comes to Blue Flag beaches – Spain and Greece top the list, each with more than 400. Tuscany and Le Marche have the most Blue Flag beaches in Italy with 16 each. Liguria has 14, Abruzzo has 13, and Campania has 12.
Blue Flags aren’t just awarded to ocean coastlines – in fact, two lakes in Italy earned a Blue Flag. One of those lakes is the Lago di Scanno in the L’Aquila province of the Abruzzo region, the same area hard-hit by the earthquake in April.
The list of 2009 Blue Flag beaches in Italy isn’t on the Blue Flag website yet, but if you’re planning a trip to the beaches of Italy this summer then you can consult the 2008 list for starters, and I’ll post the 2009 list when I find one.
More Resources