Italians have a certain flair when it comes to most things, so it shouldn’t be surprising that their New Year celebrations are unique as well. If you’re going to be flying to Italy for the New Year holiday, here are a few things you should know.
>> Want to see how the Italians celebrate New Year’s? Don’t miss the videos at the end of this page! 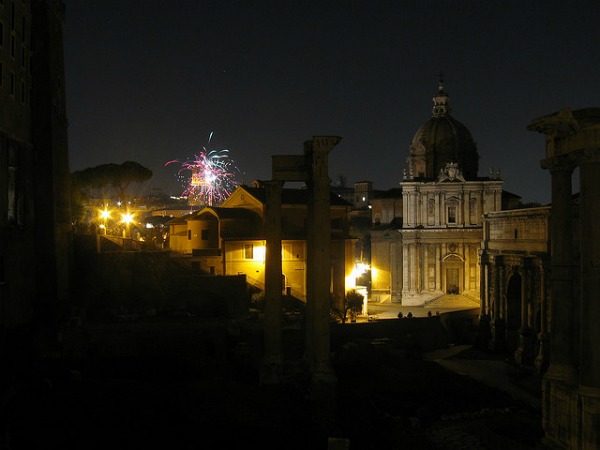 In Italian, the festival that marks New Year’s Eve – December 31 – is “La Festa di San Silvestro,” or St. Sylvester’s Feast. As the word “feast” implies, the evening meal is the focus of the day – Italians tend to gather with family and friends for dinner (this is a bit less family-oriented than Christmas dinner) and traditional menu items include pork and lentils.
Pork represents the richness of life, and the lentils symbolize money – think of them as coins – and eating them on New Year’s Eve is supposed to bring prosperity in the year head.
Following the meal, celebrations usually move outdoors (despite the often-cold weather), where some cities set up concerts in public squares or big bonfires. By far the most popular way to celebrate New Year’s Eve in Italy, however, is with fireworks.
Most cities and towns throughout the country will have some sort of “official” fireworks display, but people often have their own private fireworks shows in squares, courtyards, and parking lots. It can get very noisy and – if you’re not looking out where you’re going – a little dangerous. It can also be spectacularly gorgeous. Fireworks tend to be a bigger deal the further south you go in Italy. 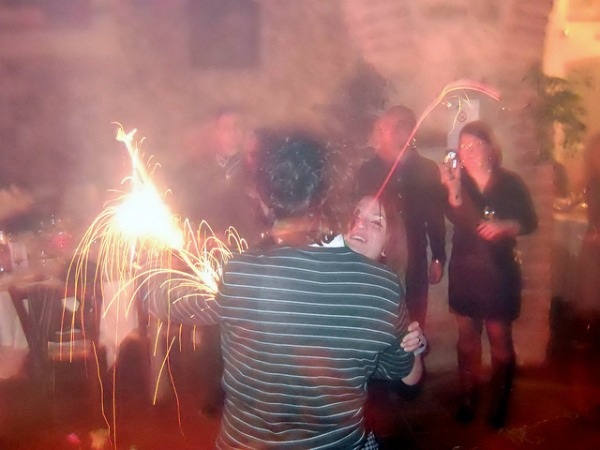 Some fireworks displays are so popular that people will stake out a spot well in advance of nightfall, so if you’re in a bigger tourist city and you’re anticipating getting a good space at the last minute you might want to check with the tourist information office to find out how things usually go.
New Year’s Eve is toasted with prosecco or spumante for the most part (these are both Italian sparkling wines). Also note that in the weeks leading up to December 31, you’ll see a proliferation of red underwear hanging in all the outdoor markets as well as shop windows – it’s an Italian tradition to wear red undies on New Year’s Eve (into New Year’s Day, naturally) for good fortune in the coming year. 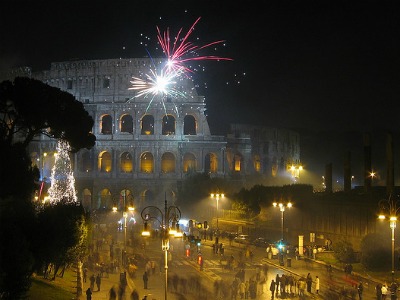 In Italian, New Year’s Day is called “capodanno” (pronounced kah|poh|DAHN|noh), which translates as “head of the year.” In fact, some even call New Year’s Eve “notte di capodanno,” or “sera di capodanno,” for night/evening of capodanno, despite New Year’s Eve having its own distinct feast name.
The festivities of the night before continue through the early hours of January 1, including the fireworks and bonfires, so if you’re a light sleeper who’s planning to turn in early-ish on December 31 you might have to alter your plans. Italy is a raucous celebrant when it comes to ringing in the New Year, so this might just be the kind of night where you can’t beat ’em – so why not join ’em?

Traveling in Italy During New Year’s 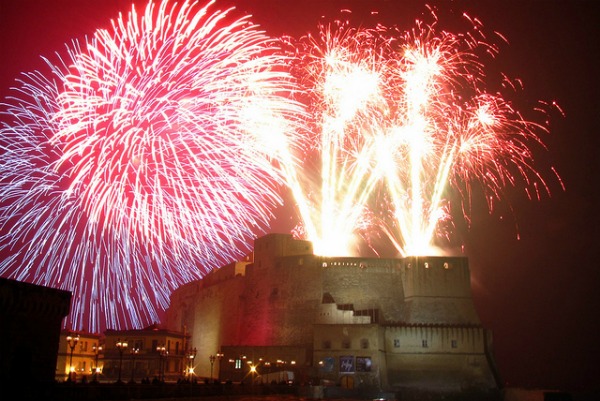 New Year’s Eve isn’t a major holiday on the Italian holiday calendar, but it does follow closely on the heels of Christmas and come just a few days before the Epiphany (both major Italian holidays), so it’s a good idea to keep a few things in mind if you’re planning a trip to Italy over New Year’s.
December 31 is not a public holiday in Italy, but January 1 is – which is just as well, since people tend to be up all night celebrating anyway. As mentioned, the Epiphany (January 6) comes just after New Year’s Day, and this is the date that really marks the end of the Christmas holiday period in Italy. From Christmas right through the Epiphany is considered a mini-high season in Italy when it comes to the cost of things like hotel rooms and airfare, and in some cases hotel rooms can book up more quickly than they otherwise might in the winter (especially in places with more famous holiday celebrations). You’d be smart to book your accommodation well in advance for popular locations.
Quick search for hotels in Rome:

Perhaps the biggest headache for travelers in Italy when there’s a holiday is transportation – it’s easy to forget that it’s a holiday when you’re just focused on what day you’ll move from Venice to Florence, only to find out that the trains are on a holiday schedule or booked solid. The holiday schedules that buses and trains adopt at this time of year doesn’t meant they stop entirely, of course – it just means that they run less frequently, which (in turn) means each one is more crowded.
To avoid these transportation hassles, you have two options:

In terms of sightseeing, some attractions will likely be closed on January 1, so check individual schedules of the sights you’d like to visit or check with the tourist information office to see what the major closures are (or, perhaps more importantly, what’s left open). It’s also worth noting that many shops and restaurants will be closed on New Year’s Day. If you’re staying in a place with a kitchen – either a hostel or an apartment rental – you can easily stock up on a few food items beforehand to get you through the day, and if you don’t have a way to store food you may have better luck with restaurants that are attached to hotels (especially big American chain hotels), as these sometimes keep more tourist-friendly hours.

More Resources to Help You Plan Your Trip

This video from Rome is loud & shaky, but I love the countdown in Italian followed by (as the title says) “showers of champagne” to go with the fireworks.

In Venice, the countdown happens in St. Mark’s Square, where there’s a stage and a concert leading up to midnight.

As you can see from this video in Naples, the explosions start long before midnight – but they really get going when the clock strikes 12. (I told you the south likes their fireworks…)

My favorite video, however, is this one – also from Venice – that just shows how a little high water (it’s up to their knees!) can’t keep the city from celebrating in style!