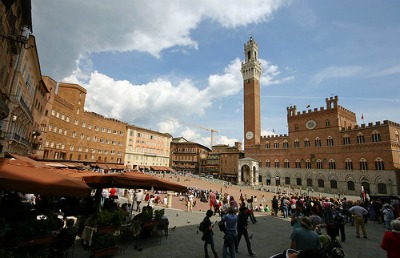 Although most people spend their Italian vacation in the “holy trinity” of Italian cities – Venice, Florence, and Rome – those who branch out and go just a short distance off the well-trodden tourist path also tend to flock to a few of the same places. One of the most popular cities to visit in Tuscany, one step off the main tourist trail but still very much a popular tourist destination, is Siena.

Siena is one of those picture-perfect medieval walled cities which has a more modern (and less interesting) city surrounding it. It’s just over 40 miles outside Florence, and can be a good day-trip from Florence if you don’t want to bother packing and unpacking for a one-night stay – but if you can spare the time, Siena is best visited as an overnight trip so you can really enjoy the medieval center after the day-trippers have gone. In this respect, I put Siena in the same category as Venice – it’s often horribly over-crowded during the day (especially in the high season), but can be enchanting in the early morning and late evening (even when it’s still kind of crowded).

The old walled city is certainly small enough to explore on foot, and that’s good because it’d be impossible to drive down most of the tiny streets. Do keep in mind that Siena is a hill town, and to get anywhere you’ll likely be heading either up or down – there are very few flat streets in Siena. In fact, even the main piazza is on a slope. Smart travelers in Siena wear comfortable shoes and take advantage of bars and gelaterie for frequent rest stops. Foodies will be interested in trying the local specialty sweet, called panforte – think seriously dense and somewhat spicy fruitcake without the booze.

Where to Stay in Siena

Staying inside the historic city walls lends to the overall experience, as you can probably imagine, but there are accommodation options both inside and outside the walls. Your budget could be one of the big determining factors on which side of the walls you end up sleeping.

What to Do in Siena 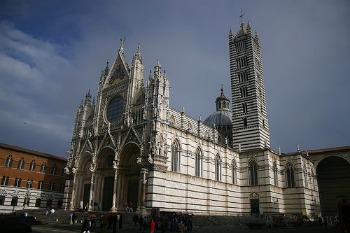 Perhaps the most famous thing to do in Siena is the Palio di Siena, which is a bareback horse race run twice each summer. The tradition dates back to medieval times, and it’s a competition between the various neighborhoods (contrade) in the city. While the Palio has become a tourist attraction for some, it’s very much a local party and not something that’s done for visitors. In other words, you’re welcome to join in the fun, but don’t expect this to be a festival catering to outsiders. And if you do decide to brave the Palio crowds, be sure to book your room well in advance – the place is packed to the gills.

Other attractions in Siena you shouldn’t miss are:

How to Get to Siena 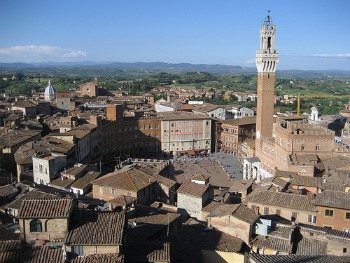 Many tourists visit Siena either as a day-trip from Florence or en route to or from Florence, and while there are train routes which connect these two cities, it’s actually faster to take the bus. The SITA bus station in Florence is across the street from the train station, and the station in Siena is at Piazza Gramsci, which is inside the city walls. It’s a roughly 1½ hour bus ride. The train ride between Florence and Siena is shorter in terms of time, but Siena’s train station is further from the medieval center and most trains actually require a transfer in Empoli.

>> Find out more about how to get from Florence to Siena

If you’re staying for a few days in Siena and want to explore the Tuscan hill towns nearby, the bus is also your best bet. Consult with a ticket agent at the bus station for the latest schedules and ticket prices.