Tips for Flying to Italy: Open-Jaw Tickets & Flying into Venice 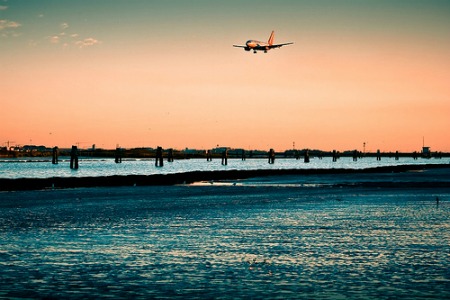 When most people plan trips to Italy, they only search for “airfare to Rome” or “airfare to Milan” and pick the cheapest options from those – sometimes without regard to what their actual itinerary might be. How many people fly in and out of Milan every year, but spend absolutely no time in the city? I mean, why bother flying into a city you’re not interested in visiting?

At any rate, my own personal preferences for flying to Italy include two things many travelers may not consider – flying into one city and out of another, and flying into Venice’s airport if at all possible. Let’s go over these one by one.

In One City, Out the Other

You might think it’s too expensive to have what’s called an “open-jaw” ticket, flying into one city and returning home from another city altogether, but they usually don’t cost that much more than a simple round-trip ticket. And consider this – if your itinerary has you starting in Venice and working your way down to Rome, for instance, you’d have to take one whole day out of your vacation (which was probably too short to begin with) to get all the way back up to Venice to fly home again.

So when you think about the value of that vacation day, which you could either spend on a train for six-seven hours or actually doing more sight-seeing, the value of having an extra day far outweighs the small additional cost of an open-jaw ticket (in my opinion). At the very least, it’s worth looking into what an open-jaw ticket would cost, right?

I’m not trying to dictate your itinerary here, but whenever people ask my advice I always advocate for starting in Venice and actually flying into Venice’s Marco Polo Airport. I recommend this for a couple of reasons. First, I think there’s really no more romantic and breath-taking way to begin a journey through Italy than with a boat ride from the airport to the Grand freakin’ Canal. I mean, if you can top that as an introduction to Italy, let me know.

Second, while airfare to Venice isn’t necessarily any cheaper than flying into Milan or Rome, the Venice airport is smaller than either Malpensa or Fiumicino, so I find it easier to navigate and easier to get through customs, baggage claim, etc. And that’s not nothing!

Of course, if you’d prefer to start elsewhere but you’ve got Venice on your itinerary, then you could end in Venice just as easily and still take advantage of at least one of my reasons for suggesting the Venice airport. And obviously if your itinerary doesn’t include Venice, then it doesn’t make sense to use Marco Polo Airport… But this recommendation applies to other smaller international airports in Italy, too, so be sure to find out where the closest international airports are to your planned starting and ending points.

For more tips on flying to Italy, see the airfare to Italy page.