Pompeii and Herculaneum, Your Gateway to the Past 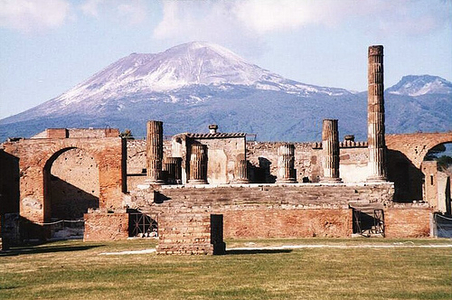 Sand-swept Egyptian pyramids, gondolas slicing through a Venetian canal, a geisha’s enticing perfume as she toddles by in a small district in Kyoto. These moments are what travelers the world over seek: an evocation of the past, a platform for understanding history’s complexities, context.

For lovers of the Roman era, only Pompeii and neighboring Herculaneum offer this and more. Their swift destruction provided a vacuum seal on the past for which archeologists are eternally grateful. Today visitors to Italy place Pompeii and the smaller site of Herculaneum on their south of Rome itinerary without fail – because with a visit of only a few short hours, the imagination is fueled with a lifetime of memories.

Pompeii History: The Mountain Becomes a Volcano
Late August, almost 2,000 years ago, the two towns at the foot of Mount Vesuvius went about their daily life as they always had. Earth tremors, dry wells, howling dogs, and silent birds forewarned the 20,000 residents of Pompeii and the 4,000 citizens of Herculaneum, but they regarded their majestic mountain as a gift from the gods and beyond suspicion. All this would change in less than twenty-four hours.

A little after midday on 24 August 79 AD a tremendous roar and gargantuan column of flame, rocks, smoke, and dust gushed forth from what had previously been regarded as a mountain; not a volcano. Within a half hour Pompeii, a mere 6 miles southeast of the crater, was pelted with pumice stones so light they floated on the seas. Concerned Pompeians initially took refuge in their homes, but as the weight of the volcanic debris began crushing rooftop structures they began to flee. By dusk it is estimated 90% of the citizens had reached safety.

Thus far Herculaneum, a short 12 miles away, had been spared thanks to strong winds pushing the worst of the volcano’s abuse on Pompeii and nearby Stabiae. Their fate would quickly change when a heavy column laden with dust, ash, and rock weakened, causing the superheated cloud to collapse upon itself. The result was an avalanche of hot ash and gases racing down the mountainside. This pyroclastic surge engulfed Herculaneum, instantly consuming every living being. Hours later a fourth pyroclastic surge would sweep through Pompeii killing all who had remained, approximately 2,000 people. Two further surges sealed both cities within earthen tombs that would take nearly 2,000 years to rediscover.

Visiting Pompeii & Herculaneum: One Day-Trip or Two?
Today these excavated towns provide a snapshot of Roman life in the 1st century. Setting aside a half-day visit will allow enough time for the average traveler and will save you from site seeing burn-out. If you want to do both Pompeii and Herculaneum in one day, allow 3-4 hours to visit Pompeii, the larger of the two sites, and 2 hours for the more intimate Herculaneum.

Trying to tackle both towns in depth in a single day may be overwhelming, however. I recommend visiting Pompeii first and saving Herculaneum for a subsequent day, time permitting. Both sites are found south of Naples in the direction of Sorrento and the Amalfi Coast and make a great mid-way stopping point or easy daytrip.

The author of this post, Karen Landes, spent two years exploring Sicily. Read more about her island discoveries in her new book, “In Etna’s Shadow: Culinary Adventures from Eastern Sicily.” Today she and her family live outside of Naples, Italy. She can be found online at www.inetnasshadow.com and www.southofrome.com.

photo at the top by Jungle_Boy