"The Genius of a Place" & the Impact of Tourism in Cortona 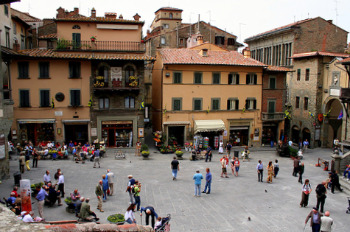 Some years ago, before I was working at BootsnAll and before WhyGo Italy even existed, I visited the Cinque Terre for the second time. I’d been there in 2001 in the height of the summer season and although there were definitely tourists around, there were long stretches of the Cinque Terre hike were I didn’t pass another person.
By my second visit in 2004, three short years later, things had changed. The hiking trails were incredibly crowded, every village was teeming with visitors (many carrying the Rick Steves guidebook), and I overheard a Rick Steves tour guide chatting with the manager of a Vernazza bar about how Rick worries sometimes about the impact his writing has had on the place.
Another example of a place transformed by a book is Cortona, the hilltop Tuscan town that author Frances Mayes decided to settle in – and consequently write about in her best-seller “Under the Tuscan Sun.” Since the publication of that book (and subsequent movie), Cortona is flooded each year with hundreds of thousands of tourists, and life – understandably – hasn’t been the same.
It’s an issue I think many travel writers think about, if not struggle with – is it possible to write about a place without altering forever what’s so appealing about it? This is the question at the heart of the documentary film, “The Genius of a Place.”
From the film’s website:

“The Genius of a Place” is a feature-length documentary that shows how Cortona, an ancient Tuscan hill town, is dealing with its sudden popularity as a tourist destination, following the publication of “Under the Tuscan Sun,” a book describing the charms of life in the area.
The story of Cortona is the story of many places around the world.
Through the story of a single place, the documentary spotlights a thorny global challenge, largely outside of public awareness and consideration: how to accommodate economic development without compromising the planet’s historic and natural treasures.
Nearly every community, whether large or small, faces similar challenges.

“The Genius of a Place” is currently in post-production, having finished filming in August, but all I needed to see was the preview to know I’ll be keeping track of this film and hunting down a place to see it when it’s complete.

The website for the film contains this note: “Warning: this film will change the way you view tourism.” I’m very curious to see the finished product.
>> Learn more about “The Genius of a Place” at the film’s official website, and keep updated with post-production and other film news at their Facebook page.
photo by po.psi.que