It makes sense that now, at the beginning of the summer travel season in Italy, that there should be new reports released which list the environmental ratings of beaches in Italy. But what I can’t understand is why there’s a need for two completely different reports, and – even more confusing – why they’d come up with different results. Still, if you’re heading for the beaches of Italy this summer, you’ve got no excuse for not knowing which ones have been declared clean – here are the basics of each of the two reports, along with links where you can find out more. 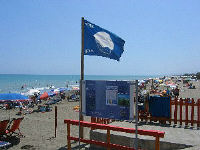 The first report was released by the Foundation of Environmental Education (FEE), which is an organization that inspects beaches all over Europe – not just Italy – and produces a report each year with a list of the beaches which have been determined to have clean water and sand. The criteria the FEE uses include water quality, environmental information, safety, cleanliness, and provisions for recycling. The FEE designates these beaches with blue flags, and in 2008, 104 beaches in Italy made the blue flag list.

Tuscany and Le Marche tied for the most blue flag beaches this year, with 15 each, followed by Liguria with 14, and Abruzzo with 13. One thing worth noting about the 2008 results is that there are 18 new beaches on the list which weren’t there in 2007, and 13 of those are in Central and Southern Italy, so it’s exciting to see environmental progress being made. 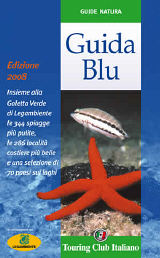 Legambiente, Italy’s leading environmental group, teams up with the Italian Touring Club each year to present their own list of the best beaches in Italy. Their results are not just based on environmental factors, but also on things like beautiful scenery or great restaurants in the area. The report is called Guida Blu, and the beaches that make the list are given “sails” to indicate how high up they rank on the list, with five sails being the best of the best.

For the 2008 Guida Blu, there are 54 beaches in Italy which have five sails, and for the first time an entire island has claimed the #1 beach slot – the island of Giglio, off the coast of Tuscany, has taken that honor. Sardinia has the most beaches on the list this year with 14, three of which made the Guida Blu’s top 10. In addition to Giglio and the three Sardinian beaches, the rest of the top 10 beach resorts include beaches in Campania, Liguria, Puglia and Sicily. Guida Blu also includes resorts on the Italian lakes in their guide.

To get more information about the Guida Blu’s top 10 beaches, see the list on the Italy Magazine website, and the index on the Legambiente website (in Italian).

Which Guide to Choose?
The FEE guide focuses entirely and solely on environmental issues, while the Guida Blu also takes other tourism factors as well, but I don’t think there’s one list of Italian beaches that’s inherently better than the other. Taken together, it’s probably an excellent list of beaches to target for a beach holiday in Italy.

But whichever list you pay attention to, you can be sure that the beaches listed on each one are not only great beaches to spend a holiday, but also potentially will be some of the most crowded beaches this summer! So book your cheap air tickets today, and don’t forget the sunscreen.