7 Best Destinations for a Honeymoon in Italy 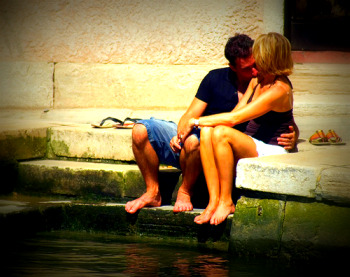 When I was planning my first trip to Italy, my then-fiance and I toyed briefly with the idea of eloping while we were there. After a quick perusal of a few websites and books, it became clear that putting the words “Italy” and “eloping” into the same sentence wasn’t going to be easy, and we abandoned the plan. But it’s not surprising at all that Italy routinely ranks among the top honeymoon destinations in the world, for the same reason that we initially wanted to get married there – it’s so incredibly romantic.
So, if you can’t be bothered with everything it would take to organize a wedding in Italy, then planning a honeymoon in Italy is absolutely the next best thing.
But where in Italy should you spend your honeymoon? That might be the most challenging question to answer. Because there are so many places in Italy that seem tailor-made for a romantic vacation of any kind, you almost can’t go wrong. Almost.
I know people who honeymooned in Rome and loved it, and I know there are romantic Rome hotels that could probably make a honeymoon in Rome feel deliciously luxurious, but if you’re asking me (which you kind of are, since you’re reading this article) where you should go on your Italy honeymoon, Rome isn’t going to make the cut. Instead, here are my top 7 Italy honeymoon destinations (which will, of course, work for any romantic Italy trip you’re taking – honeymoon or not).

Sure, the whole “Tuscan Sun” thing has been played out, and you’re bound to run into more tourists in Tuscany’s famed hilltowns than Italians during some parts of the year, but there’s a reason people keep coming back to this region of central Italy year after year. It’s bloody gorgeous.
Y’know those pictures you’ve seen of mist-covered green hills punctuated by spire-like cypress trees winding along on either side of the driveway to someone’s ancient and beautiful farmhouse? Those places exist, and with remarkable frequency, throughout Tuscany. The food can be amazing (and inexpensive), the wine is legendary, and there’s nothing quite like sharing a moment in a cobbled piazza with your sweetheart – preferably over gelato.
I’d recommend honeymooners base themselves in a quieter hill town for the bulk of their honeymoon, just to make the most of the relaxed atmosphere, but unless you hate art you really can’t spend time in Tuscany without visiting Florence for a couple of days. Otherwise, towns like San Gimignano, Lucca, Montalcino, and Pienza are worth considering (make sure you know which ones have train stations, as that can be an issue if you’re not planning to rent a car).
>> More Tuscany travel information

Images of the Amalfi Coast are enough to make any traveler drool, and especially anyone planning a honeymoon. Who doesn’t love the thought of sun-drenched beaches and pastel-colored buildings cascading down hillsides? And when you add the fact that this part of Italy is a playground for the rich and famous, it makes it even more alluring.
There are several towns which make up the Amalfi Coast (including one actually called Amalfi), and several more on the coast nearby which aren’t technically part of the Amalfi Coast but are close enough to make getting back and forth for day-trips easy. There are also a few islands just off the coast itself which take the whole sense of honeymoon luxury up another few notches.
The town of Positano is one of the best-known in this area, and a favorite destination for a romantic Italy vacation. Other towns worth considering for your home-base are Amalfi, Ravello, and Sorrento. And if the islands sparked your interest, look for a place on Capri, Ischia, or Procida.
>> More Amalfi Coast travel information

This may seem like an unusual suggestion on a honeymoon destination list, but after listening to an episode of The Amateur Traveler that was all about Sicily, I think it’s probably the ideal honeymoon spot for people who want to experience more of the “real” Italy – the more intense Italy – and, perhaps even more important, those who want to escape the crowds.
The Sicily podcast interviewed Madeline Jhawar, who used to be a tour guide in Italy and who spent her own honeymoon in Sicily. She points out that it’s where tour guides in Italy go on vacation, and if there’s a better endorsement than that, I don’t know of one. Sicily is the biggest island in the Mediterranean and enjoys warm weather all year long – in fact, it’s downright stifling in summer, so it’s a great spot for a fall or winter honeymoon.
If you want more than just beautiful beaches on your honeymoon, however, Sicily doesn’t disappoint. The island is home to both Roman and Greek ruins, and some very high-end resorts from which to experience it all. Resort towns like Taormina and Cefalù have been welcoming sun-seekers for ages, but don’t expect traveling through these places (or anywhere else in Sicily for that matter) to be as straightforward as travel is in other parts of Italy. Knowing some Italian is a good idea, and having a spirit of adventure is almost a prerequisite. If you go, you’ll be rewarded with warm weather and warm people.
>> More Sicily travel information

So, if I told you that some of the most romantic scenes from the latest crop of Star Wars movies – including the kiss on the balcony and the wedding itself – were filmed in the Italian lakes region, would that be enough to convince you that it’s a great honeymoon location?
In truth, the lakes region in Italy was a popular honeymoon destination – and overall a popular vacation spot – long before a film crew decided to shoot some scenes there, and it’s easy to see why. There are several lakes in the northern part of the country, any of which would make a great base for a honeymoon (which one would depend in part on whether you wanted to stay put and lounge about or make day-trips elsewhere, as some are more well-connected than others).
The most famous lake is probably Lake Como, home to George Clooney among others in the rich and famous set, but Lake Maggiore would be a close second. The good news is that you can visit many of the towns on one lake, or a couple towns on each lake, if you’ve got the time and the right transportation. How decadent does a lake-hopping honeymoon in Italy sound?
>> More Italy lakes travel information

I kind of think the Cinque Terre are to budget travel what the Amalfi Coast is to luxury travel. With both places, you get the same kind of coast-town atmosphere and multi-colored cliffside houses, but with the Cinque Terre you’re brushing by backpackers carrying Rick Steves books – whereas on the Amalfi Coast you could be rubbing shoulders with the vacationing elite. But all the focus of the backpacker/budget travel set on the Cinque Terre has somewhat overshadowed the other beautiful towns on the Ligurian coast – which is, after all, called the Italian Riviera.
Many of the towns along Liguria’s coastline have the same kind of scenery you’ve come to expect from places like the Amalfi Coast and the Cinque Terre, but most of the non-Cinque Terre towns aren’t nearly as visited as those on the Amalfi (at least by non-Italians). And although the water you’d be lazily staring at isn’t technically the Mediterranean (it’s the Ligurian Sea), you’re not likely to notice.
In fact, if you’ve ever looked into taking a Mediterranean cruise, you may recognize the name Portofino – it’s a popular port of call, and (like some of the Amalfi Coast towns) more of a high-end vacation spot. But nearby towns like Santa Margherita Ligure, Portovenere, and Rapallo are other towns you might want to consider as a seaside base for your Italian honeymoon.
>> More Liguria travel information

The other big island off Italy’s coast besides Sicily is Sardinia – and it’s even more remote and less populated. I’d say that Sardinia might be a better choice for a honeymoon in Italy if you’re more of an intrepid traveler, are planning to rent a car, are hoping to do some active outdoorsy stuff on your honeymoon, and still want to have a gorgeous sandy beach nearby to recover after a strenuous hike.
Sardinia may be most famous with travelers for its beaches (yes, including some of Italy’s nude beaches), and one beach town on Sardinia was even named the #1 “emerging destination” for 2009 by Trip Advisor. Sardinia’s beaches (especially on the Costa Smerelda) are some of the most popular August holiday destinations for Italians, who make it so you almost can’t see the beaches themselves for all the bodies on them. So if you’re looking for a beach town in which to escape the crowds, you might need to look elsewhere (but at least you’d be surrounded by Italians!).
Beyond the beaches, however Sardinia is also a great spot for those who love hiking, sailing, mountain biking, kayaking, and other outdoors activities. In fact, many of the guided tours on the island are just about outdoors activities and have nothing to do with the beaches at all. Still, it might be nice to know the beaches are there if you want them.
>> More Sardinia travel information

You knew I had to include Venice on my list, right? I mean, I can’t stop talking about how much I love the city, after all. And while there are valid reasons why you might want to avoid Venice on your honeymoon, there are also few places I can think of that can match the canal city for overall romantic impact and “wow” factor. And if you do it right, you can avoid (or at least avoid getting hung up on) the things that people will warn you about when it comes to Venice, leaving you with nothing but happy honeymoon memories.
Venice isn’t the kind of place I’d suggest for an entire honeymoon, unless you’ve got bottomless pockets, because it really is an expensive place to stay. But the city does warrant a couple of days, if only to experience the bliss that is early-morning Venice before the day-trippers arrive or late-night Venice after they’ve left. There’s nothing more perfect for a honeymoon “to-do” list than to simply wander through beautiful alley-like streets, getting utterly lost and having only your newly-minted spouse for company. Bonus points if it’s a little chilly out, requiring extra-close proximity while strolling.
I’ll be the first to admit that in order to truly love Venice you’ve got to make a little bit of effort, so if you’re in the market for an Italy honeymoon that basically runs on auto-pilot once you arrive, then look elsewhere. If you don’t mind meeting Venice halfway, however, then I highly recommend it. It’ll be my pick if the husband ever utters the words “second honeymoon.”
>> More about romantic hotels in Venice
>> More Venice travel information

In listing these seven places that I think would make the perfect place for a honeymoon in Italy, I’ll hastily add that I’m barely scratching the surface of honeymoon-worthy destinations. I left out the beaches of Puglia, the rolling hills of Umbria, and the mountains of the Piedmont – and a million other places where you could have a lovely romantic vacation in Italy.
So what would be your pick for the best place to spend a honeymoon in Italy? Let me know in the comments below!
photo by yanivba, enhanced with Picnik.com by me