How to Get from Florence to Naples (& vice versa) 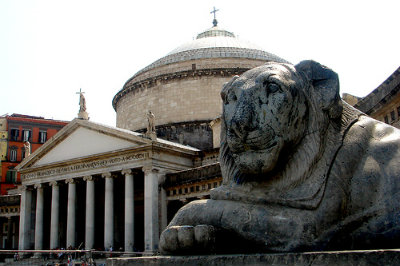 Travelers interested in getting beyond the well-beaten Venice-Florence-Rome path without venturing into the hinterlands need look no further than the southern Italian capital of Naples. This huge city has the benefit of being on Italy’s high-speed rail line, and visitors can avoid being overwhelmed by simply ignoring most of the sprawl and focusing on the fantastic historic center.
Naples makes an excellent base for exploring sites like Pompeii and Herculaneum, as well as the picturesque Amalfi Coast. Plus, it’s cheaper than most of the cities in north, and it’s the birthplace of pizza – what more could you ask for?
Here’s an overview of how to get from Florence to Naples. One big reason to structure your trip this way, without a stop in Rome, is if your flight out of Italy at the end of your trip is from one of Rome’s airports. After your stay in Naples, you can make your way back up to Rome to spend a few days in the capital before flying out.
>> More information on getting from Naples to Rome
Important:

Taking the Train from Florence to Naples

ShowBookingWidget();
As mentioned, Naples is one of the cities on Italy’s high-speed rail line – and so is Florence. This means you can take one of the Frecciarossa trains all the way from Florence to Napls with no train changes required, and all in under three hours. It doesn’t quite make Naples a day trip from Florence (or vice versa), but it does make getting from one of these cities to the other much less painless than it used to be.
With these high-speed trains, you can hop on the train after a leisurely cappuccino in Florence and disembark in Naples in time to saunter into a pizzeria for lunch.
Of course, high-speed train tickets aren’t cheap. A “normal” 2nd class ticket from Florence-Naples on the Frecciarossa train is just under $100 (a 1st class ticket is just over $140). If you’re booking in advance, you can often get the “saver” fares, which get you up to 60% off the normal price. As of this writing, a 2nd class Florence-Naples “saver” fare is $68 and a 1st class “saver” fare is $98.
Slower trains between Florence-Naples do exist, and can take 5+ hours to make the trip. A 2nd class ticket on one of these slower trains can still come in at roughly $60, so it’s worth it to see if you can book in advance to get a “saver” fare on a high-speed train instead. Just put your travel information into the box above and look for the “Saver Fare” option. Note that the “saver” fares sometimes do sell out in advance, and also that you can only book tickets for the next few months – the ticketing system doesn’t allow sales for travel dates past 90 days or so from today’s date.

Taking the Bus from Florence to Naples 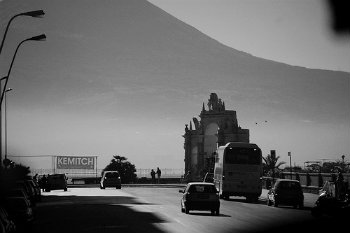 Generally speaking, taking the bus from one region to another in Italy is (to my mind) unnecessarily challenging to the outsider who is unaccustomed to Italian transportation. That said, there are an increasing number of companies that offer trans-regional bus service, and that actually post such information online. So if you’ve got a bit more time to play with and your budget is so tight that even those “saver” train fares make you wince, there is a bus option to get between Florence and Naples.
A few regional Italian bus companies have joined forces with the European bus transportation conglomerate, Eurolines, to provide long-distance bus service. Eurolines buses leave from Florence 2-3 times a day, and the trip takes about seven hours. A regular adult ticket is €35. (The Naples-Florence buses run less often, but the ticket price and trip duration is the same.)

Driving from Florence to Naples 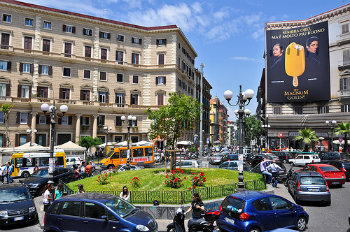 Driving in Florence is a pain, what with its narrow medieval streets, but driving in Naples is pain on a whole other level. I don’t recommend driving to get around Italy if every stop on your itinerary is a big city, but if you’re planning lots of countryside driving day trips from bases in Florence and Naples then obviously a car will be required. Just note that you’ll want to minimize your driving in each city center.
The ViaMichelin.com site is handy for plotting general driving routes in Italy, as it provides distances and driving times (barring accidents and traffic) as well as roughly how much you’ll need to pay in tolls. The site tells me that the 474km trip takes about 4.5 hours, and the mostly-highway route includes about €30 in tolls.
Using ViaMichelin, you can input specific addresses to get more detailed driving directions, and I’d also recommend getting a really detailed Italy road map before you get in the car. You can sometimes find these at good travel bookstores outside Italy, but even more detailed driving maps are usually available in Italy for specific regions of the country.

Flying from Florence to Naples 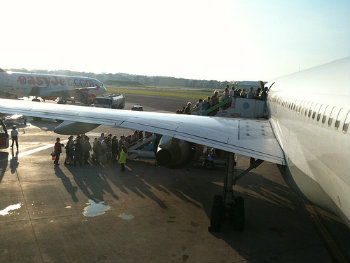 Florence is relatively close to two airports – the one in Florence and the one in Pisa – and Naples has a sizeable international airport. This means that you can fly from Florence to Naples (or vice versa) if you want to. I wouldn’t recommend it, but hey – it’s your trip, right?
Flying from Florence’s Peretola Airport (FLR) to Naples’ Capodichino (NAP) can take as little as three hours, and as much as 6-9 hours – which is just plain crazy. The reason for the ridiculous trip duration? Layovers. There aren’t direct flights between Florence-Naples, so some of the itineraries require long layovers. These tickets can cost in the $130-190 range one-way.
Even if you choose to fly out of the larger Pisa Airport (PSA), you’re still stuck with a potentially long layover. Flights between Pisa-Naples can be three hours or as much as seven hours due to layovers, and the cost of the tickets is about the same as the Florence-Naples tickets.
The bottom line? It’s an expense you shouldn’t bother with, especially if it requires twice as long as the train. Of course, if you want to look up flights anyway, who am I to stand in your way?
Quick search for flights from Florence-Naples:

Quick search for flights from Pisa-Naples:

Now that you’re in Naples… 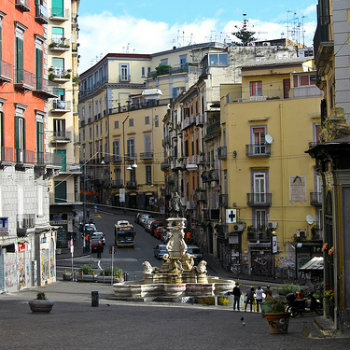 Need some help planning the rest of your Naples stay? These links should help: