10 Movie Locations in Italy You Can Visit

While many movies these days are filmed on Hollywood sets or in front of green screens and full of fantastic animation, there’s nothing that can quite compare with a stunning – and real – Italy backdrop. So if you’re wondering where some of your favorite movies were filmed, here are 10 movies filmed in Italy – and where you can go to see the movie locations for yourself. 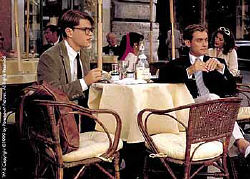 In this clever 1999 thriller, there are actually several places in Italy where key points of the story is set – including Rome, Venice, Anzio, Palermo, Naples, Ischia, and Positano. The Hotel Europa & Regina on the Grand Canal in Venice serves as the setting for Greenleaf’s hotel in the movie, the Martorana church on Piazza Bellini in Palermo is where Peter rehearses with the choir, Le Grand Hotel in Rome is where Ripley commits a particularly grisly act (which I won’t mention, as it’d be a major spoiler to do so!), and Venice’s famous Caffè Florian is where Marge lets on that she thinks something fishy’s going on. And those are just a few of the Italian locations used in the film! To highlight just one, Venice’s historic Caffè Florian has been serving happy customers since 1720, and enjoys a prime location on Piazza San Marco. You’ll pay more for a beverage or snack here than you will elsewhere in Venice, but oh – the view! 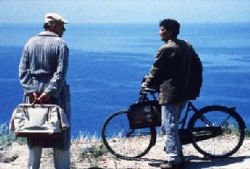 You may have been captivated by the beauty of the island where this sweet and sad 1994 film takes place. Well, you need look no further than the Italian island of Salina off the coast of Sicily if you’d like to experience that beauty first-hand. You can even frolic along the same rocky coastline seen in the movie – they’re the Semaforo di Pollara rock formations on the beach at Pollara. Salina is the second largest of the Aeolian Islands, and prior to the movie’s release it was almost unheard of on the tourist map, but unfortunately Pollara Beach has actually suffered a bit of erosion due to the motors of tourist boats who want to check it out because of the popularity of the movie. Salina actually consists of six inactive volcanoes, two of which form tall peaks which gave the island its former Greek name, Didyme, meaning “twins.” The entire island has a little over 2,300 residents, but while it’s still not exactly a tourist hotspot you can still find hotels and restaurants there. What you probably won’t find, however, are a lot of people who speak English.

The Passion of the Christ 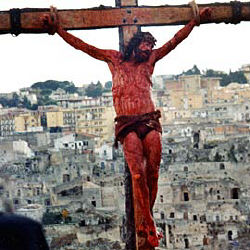 The city of Matera in the Basilicata region serves as the setting for the crucifixion scene in this controversial 2004 film by Mel Gibson. Gibson was pleased that much of the city looks as it might have 2,000 years ago, thereby requiring little in the way of modification by the film crew. In addition to the crucifixion, the sets for flashbacks to Jesus’ childhood home and his father’s shop were built in a cottage in a national park near Matera. Of particular interest, both to Gibson as he was scouting film locations and to tourists of all kinds, are the so-called “Sassi di Matera,” or “stones of Matera.” The Sassi you can see today are the remains of an ancient settlement – there are primitive houses dug into the rocks, and they are said to date back more than 9,000 years. The Sassi are now a UNESCO World Heritage Site.

The Life Aquatic With Steve Zissou 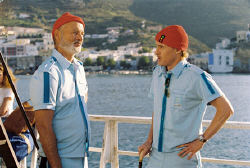 This quirky 2004 Bill Murray comedy uses several Italy locations as a backdrop, including Anzio, Naples, and the island of Ponza in the Campania region, as well as Rome in the Lazio region. Aside from some scenes which are clearly in Rome, the Italian locations could (for the most part) be just about anywhere in the Mediterranean. Anzio is a popular beach resort a little over 30 miles south of Rome, and Ponza is reachable by ferry from Anzio. The city dates back to pre-Roman times, when it was called Antium, but if the name Anzio sounds familiar to you it’s probably because it was an important landing site for the Allies during World War II. The area’s main attractions these days are the beaches and the WWII sights. 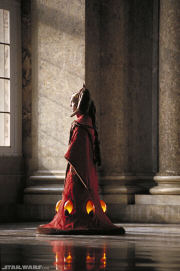 Much of this 1999 prequel to the real Star Wars movies (AKA the ones I grew up with) was done with computers, but the coronation scenes are all set in the city of Caserta in the Campania region. It’s the Royal Palace of Caserta that serves as the Royal Palace of Naboo. The city of Caserta dates back to the 9th century, but the palace itself is modern in comparison – it was built in the 18th century to serve as a residence for the then-kings of Naples and Sicily. Modeled after Versailles outside Paris, the palace grounds include not only the palace itself but an incredible array of gardens, lakes, fountains, and waterfalls. When it was completed, it was the largest palace of its time. It’s not only the most-visited attraction in Caserta, it’s one of the most-visited attractions in the country, and it was added to UNESCO’s list of World Heritage Sites in 1996. Incidentally, a room in the Caserta Royal Palace also served as a room in the Vatican for Mission Impossible III. 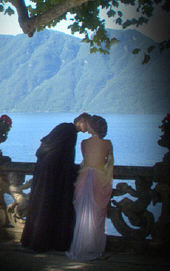 When the Star Wars folks set about making the follow-up to Phantom Menace in 2002, they headed back to Caserta to do more filming at the Royal Palace – but they clearly enjoyed their time in Italy, because they didn’t limit themselves to just Caserta. Additionally, for Queen Padme’s home on Naboo, they used the impressive Villa del Balbianello which overlooks Lake Como in the Lombardy region. Scenes shot at the villa include the wedding and the balcony kiss. The villa is in the village of Lenno, and was built in the 18th century for a Cardinal. It had previously been a Franciscan monastery, and there are still towers on one side of the villa which once served as the bell towers for the church. Several people have owned the villa over the years, but it was left to the Italian equivalent of the National Trust in 1988 and is now open to visitors. It includes a small museum with artifacts collected by the last owner, an Italian explorer, as well as rooms full of 18th century furniture.

Under the Tuscan Sun 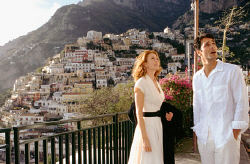 With a name like that, you’d be disappointed if you found out this 2003 film was shot anywhere but in Italy – but don’t worry, you’ll have no reason to be disappointed. (Well, I was disappointed in the movie, but that’s another story.) There are lots of Italian settings in the film, including Florence, Arezzo, Montepulciano, and Cortona in Tuscany and Postiano and Salerno in Campania. It’s Arezzo where you see the medieval flag-waving demonstration, and Montepulciano where the wedding takes place. But it’s the sun-drenched coastal cities of Positano and Salerno which serve as the backdrop for Frances’ flirtation and fling with her Italian hottie. The city of Cortona is where the real Frances Mayes bought her real Italian farmhouse, and although the city’s popularity as a tourist destination increased dramatically after the book was published, it’s been a tourist destination for hundreds of years. Of course, before Mayes’ book, those tourists were primarily from the UK and France instead of the USA! 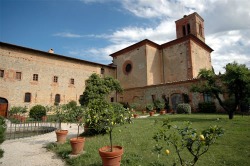 This 1996 epic love story is actually largely set in Italy, although you might not realize it. For instance, the hotel scenes which are supposed to be in Cairo are actually set in the Grand Hotel des Bains on the Venice Lido. And Le Grand Hotel in Rome makes an appearance as well – the same hotel used in The Talented Mr. Ripley. The pool at the monastery of Sant’Anna in Camprena outside Pienza is also used for some scenes. This Tuscan monastery dates from the early 14th century, and although it was closed as a monastery in the late 18th century it is open today for tourists, visitors wishing to spend the night, people looking for a peaceful retreat, and there’s even an agriturismo on the old monastery’s grounds. Most of the buildings visible today date from the 16th century, and one of the highlights is the old refectory and its Sodoma frescoes. 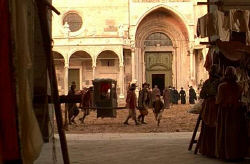 The Lombard town of Cremona serves as the birthplace for the violin in this 1998 movie’s title, which is only appropriate – Cremona is the real-life home of the legendary Stradivarius violins. The city’s history dates from 400 B.C.E., and Cremona was an important city to the Romans – it served as a base from which Roman troops invaded an adjacent province. Today, the city’s main sights are the cathedral and the many churches, although many people come every year to visit the place where Antonio Stradivari and his family once made his amazing violins. But Cremona is an important city in the history of the violin even beyond the Stradivari name. The Amati family made violins in Cremona for roughly 200 years, and although the last of the Amati violins was made in the 1700s, some of the original 16th century Amati violins survive (Stradivari himself was a student of one of the original Amati violin makers). The Guarneri family made violins in Cremona in the 17th and 18th centuries, which is when the Stradivarius violin was also being produced. The Museo Stradivariano in Cremona contains drawings, models and more than 700 examples of Stradivari’s work.

My House in Umbria 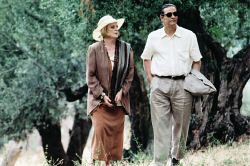 It’s quite possible to travel from Tuscany into Umbria and back again without realizing you’ve crossed a border. The two neighboring regions are incredibly similar, which is probably one of the reasons the filmmakers for this 2003 movie decided to set up shop outside Siena – which is in Tuscany – instead of a town in Umbria. Because much of the movie is set in the house of an English woman living in Italy, the exact location in either province would have been hard to pinpoint anyway, and the stunning scenery is gorgeous enough in either Umbria or Tuscany that if you happened to book a trip to Umbria after seeing the film, you wouldn’t be disappointed. Using Siena as a base from which to explore the Tuscan countryside is a lovely way to spend a holiday – the historic center of Siena is a UNESCO World Heritage Site and utterly charming, and the surrounding hills (and hill towns) are the stuff of, well, Hollywood movies. How appropriate.
Sources – Thanks to sassiweb, the Padawan’s Guide, the Italian Movies site, and the ever-resourceful IMDB.