Italy is a famously romantic destination, and Americans are lucky to get two weeks of vacation each year – so I’m combining those two factoids in this romantic two-week Italy itinerary. This itinerary includes the romantic cities of Venice and Verona, the lakes in northern Italy, the hill towns of central Italy, and a few days in Rome.
>> You might also like – 7 Best Destinations for a Honeymoon in Italy 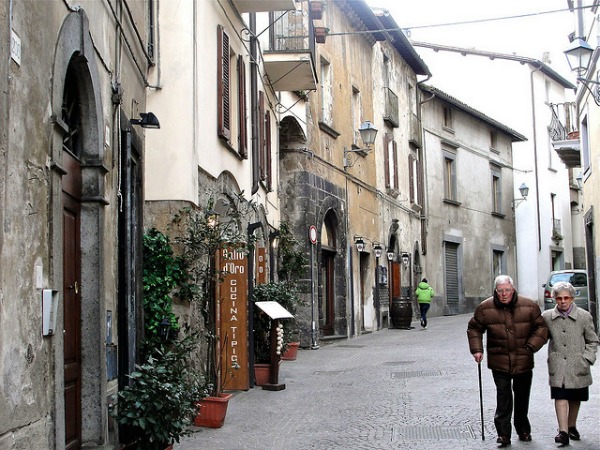 This Italy itinerary is a good option for a honeymoon, and because it includes two of the three main tourist cities in the country (with room for a day trip to the third) it still works if you’ve never been to Italy before and you want to make sure to hit the highlights in between your leisurely romantic strolls. Nothing on this itinerary is really beach-related, but because the countryside and scenery are the focus for most of the stops this itinerary may be better suited to spring, summer, or fall trips.

You’ll fly into Venice (VCE) and out of Rome (FCO).
Quick search for flights to Venice:

ShowBookingWidget();
This itinerary is easy to do on public transportation (train and bus). If you want to tweak the itinerary a bit to allow for a bit more off-the-beaten-path exploration, you could rent a car after your stay in Verona and drive through Tuscany and Umbria. I do recommend arranging to drop off the car before you get to Rome, however, as driving in Rome is more than a bit of a hassle.

You’ll arrive at Venice’s Marco Polo Airport, probably in the morning, and get situated at your hotel. You’ve got 2.5 days in Venice, which is plenty of time to see the main sights at a leisurely pace and even squeeze in a half-day trip if you like, but I’d still suggest that you drop your stuff off in your room and get back out to walk around – aimlessly – as soon as possible. If you want to check off the big sights on your first day, visit St. Mark’s Basilica and the Doge’s Palace and take a #1 vaporetto the length of the Grand Canal.
The half-day trip you can work in here is to visit the main islands in the Venetian Lagoon (Murano, Burano, and Torcello), which is an easy half-day trip via vaporetto. Otherwise, plan to meander at will in Venice for the entire time – you won’t regret it.
After your third night in Venice, you’ll make your way to Verona. It’s between 1hr 10mins and 2hrs 15mins by train from Venice-Verona, depending on the train you take, so try to get an ES City train to use that hour in a way you’d prefer. Tickets on the ES City train are $24-37 for 2nd class and up to $56 for 1st class – the slower trains are $11 for 2nd class (no 1st class available).
You might also like:

After you get to Verona, you’ll get settled into your hotel and have the rest of the day to explore the city. I’d recommend booking a hotel right in the historic center so it’s easier to reach the things you’ll want to see. And nevermind that the “Romeo & Juliet”-inspired tourist attractions there aren’t even the best parts of the city – it’s just as beautiful and romantic as you imagine it to be.
Verona is very walkable, and the historic center isn’t large, so you’ll be able to see quite a bit during your first day in the city. There’s the Roman area in the city center, the River Adige to walk along, several beautiful churches – including the main cathedral, picturesque piazzas, and – of course – Juliet’s balcony. The balcony itself was added to the building in the 20th century, so it’s clearly not the actual site of anything from the romantic story – but between the balcony (yes, you can go inside the house – for a fee – and stand on the balcony) and the statue of Juliet in the courtyard below, it’s not surprising that you’ll find so many of the visitors in Verona right here.
On your second day in Verona, you can pick up where you left off and continue sight-seeing right in the city, or you can take a day trip to one of the towns on nearby Lake Garda. Buses leave Verona regularly for towns along the lake’s eastern shore – Verona-Garda is about an hour, Verona-Malcesine is about two hours. Bus tickets are cheap, €5-8 one-way, just make sure you know when the last bus back to Verona is so you’re not stuck.
The next day you’ll take the train to Siena. This is the longest travel day of the trip – it’s a train trip of between 3.5-4.5 hours and it requires two transfers – but the rest of your travel days are pretty easy, so I figured you could handle this one. Most trains transfer first at Bologna and then at Florence. The Florence-Siena portion of the trip is typically better by bus than train, and the buses leave right across the street from the train station in Florence, so you can opt to take the train as far as Florence and then switch to a bus. Or, if the hassle factor is already too high on this travel day, just stick to the trains.
If you’re interested in driving through this part of the itinerary instead, I’d recommend renting a car in Verona at the end of your stay and driving to Siena. It’s just over 300km/3 hours on the highway, and then you’d have a car for about a week while you explored Tuscany and Umbria. I’d suggest plotting preliminary routes on the Via Michelin site, and then having a GPS unit and a good map in your car. Note that parking in Siena can be quite difficult, so if you’re planning to drive finding a hotel with some kind of parking arrangement is a huge bonus.
You might also like:

Once you’ve made it to Siena (finally!), you’ll get settled into your hotel and go exploring in the city. The expanse of modern Siena stretches out quite a bit, but the historic center is incredibly compact – so if you can swing it, I recommend finding a hotel in the historic center. Note that while it looks like a small area on the map, the center is quite hilly, so plan to take your time when you’re walking.
There are several churches and historic buildings to visit in Siena – the most popular include the striped Duomo and the City Hall; the latter building includes the tower that overlooks the main square, so you’ll get great views of the city from the top. On your second day in Siena, you can keep wandering through the historic center or you can take a day trip to Florence, Pisa, San Gimignano, or any number of other nearby hill towns. Or, if you’ve got a car for this part of the trip, you can set off in whatever direction looks interesting and let the GPS unit guide you home when you’ve had your fill. There are far worse ways to spend a day in this part of Tuscany, believe me.
After three nights in Siena, you’ll go to Orvieto next. It’s another hill town, albeit smaller, and this one is in Umbria. The train takes roughly two hours – the faster trains are just under two hours, require one change (at Chiusi), and tickets cost $20. For drivers, it’s just under 125km/1.5 hours on the highway. You can park at the base of the hill and take the funicular up to the town itself.
You might also like:

Arrive in pretty Orvieto and get settled in your hotel – again, for a stay that’s just a couple of days long, it’s a good idea to stay in the historic center. In this case, that also means atop the hill. It’s beautiful to see the town from the bottom, and of course its position affords pretty views in all directions.
The main sight in Orvieto is its main cathedral, but there are other historic churches and other buildings you can visit (including a former Papal residence). The hill on which Orvieto is built is actually fairly easy to carve, which means there’s a network of ancient tunnels under the city that are open for guided tours, too. If you’ve got a car, you can also spend part of your stay driving down whatever road looks interesting and letting GPS get you back home again.
Really, though, take your day and a half in Orvieto to wander the narrow lanes and imagine what it would be like to live there. Yes, you should feel free to make up book titles and debate who would play you in the movie version.
Soak up as much of this small-town charm as you can, because after two nights you’ll head for Rome. The train ride to Rome’s Termini Station is just over an hour (with no changes) and tickets cost between $15-30 for 2nd class (and up to $40 for 1st class). For those of you who have driven as far Orvieto, I highly recommend dropping off the car before you drive into Rome – driving into the city can be a headache, especially if you’re not accustomed to driving in Italy, and that’s a surefire way to take the romance out of any day. Look for rental car offices that are outside Rome’s city center (to the north, if possible, since that’s the direction you’re coming from) and plan to take a taxi to your hotel from there. The drive from Orvieto-Rome is about 103km/1.5 hours, not counting traffic.
You might also like:

After getting settled into your Rome hotel, you can either ease into the city or tackle it head-on – it all depends on you.
To ease into Rome, I’d suggest zeroing in on a couple neighborhoods in the historic center and wandering through them as if they were a hilltop town. The Trastevere (on the same side of the river as the Vatican) is a good option, as is the Monti (not far from the Colosseum).
To dive right into Rome, get yourself a good city map at a newsstand – one that includes the bus/tram lines – and start plotting out the sights you’ll see. The sights of Vatican City can take a half-day or more, and you might consider a guided tour for the museums (pick one that gets the tickets in advance so you don’t have to wait in the line). There’s way more to see and do in Rome than you’ll have time for, so prioritize the attractions according to what you really want to see.
For a slice of romantic Rome, enjoy a gelato while checking out the monuments all lit up at night – the Colosseum in particular is pretty cool at night – and don’t forget to re-live those “Roman Holiday” moments at the Mouth of Truth and the Spanish Steps. On your flight back home you can start planning your return trip to see more of romantic Italy.
You might also like: